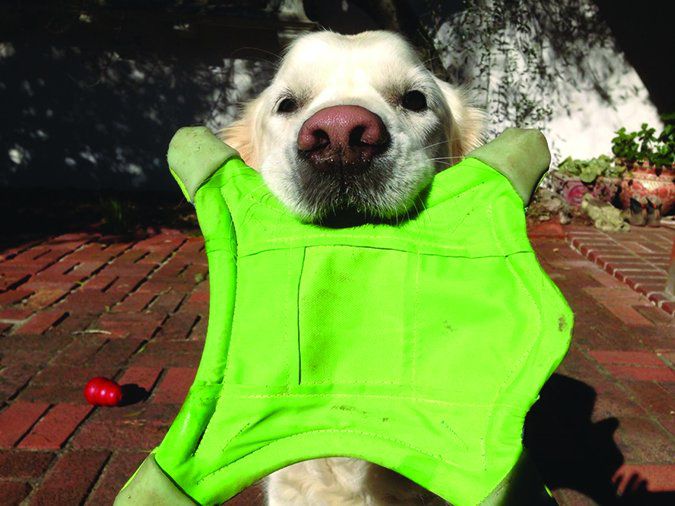 I adopted my first Australian Kelpie in the mid-1980s. This is a breed I cheerfully describe as “Border Collies on uppers” – and I quickly realized that my ball-crazy Keli was going to drive me crazy if I didn’t teach her an “off switch” cue.

I used her favorite toy – a tennis ball – to teach her that “All done!” meant there was absolutely no point in continuing to ask me to throw the ball. This then translated easily to other situations where I needed to tell her that we were done with whatever activity we had been engaged in – whether it was play, training, or casual interactions.

Here’s how you can install an off switch in your own dog:

1. Start with a long play session – long enough that it’s reasonable to expect that your dog will be able to end the game and relax.

The goal is to have him more or less ready to quit on his own – at least when you start teaching “All done!”

2. Give your “All done!” cue, and put the toy somewhere your dog can no longer see it – in a cupboard or in a backpack – and ignore any of your dog’s efforts to re-engage with the toy.

3. Notify any other humans in the vicinity to also ignore your dog’s attempts to get them to play.

NOTE: Training humans to ignore your dog’s attempts to get them to play fetch might be the hardest part of this! You have to be very assertive with them! Alternatively, you can just leash your dog and move away from the most insistent dog lovers.

4. Watch your dog, so you notice and can reinforce him for any appropriate behavior that is not attention-seeking. If your dog stops staring at you and, instead, retreats to his bed, go to him and praise and pet him calmly (assuming he likes petting).

5. Make sure to give your dog plenty of opportunities to engage in ball-chasing and other favorite activities daily. You don’t want your dog to feel deprived after you tell him that you are done for the moment, but confident that he will have another opportunity later.

6. Generalize your “All done!” cue by using it in other training situations and recreational activities, so that your dog will realize that the cue means the end of whatever he is doing when he hears it. For example, you can use the cue when you’ve allowed your dog-who-loves-to-lick to kiss your face several times and then you’ve had enough.

Herding dog trainers commonly use “That’ll do” as a “off switch” cue – and the expression was popularized by the movie “Babe.” (Remember? It’s when the talented swine was told: “That’ll do, Pig!”)

You can, of course, use whatever cue you want. But stick with it! Trust me, you will find it well worth the time and effort it takes to teach your persistent dog that enough is enough when you say it is.