Home Full Issue PDF Download the Full March 2017 Issue PDF
On February 3, 2017, the FDA announced that Evanger's Dog & Cat Food had recalled five lots of its canned Hunk of Beef dog food, for a "potential contaminant," pentobarbital. One dog has died as a result of eating the contaminated food. Evanger's canned food appeared on WDJ's "approved canned dog foods" in our October 2016 issue. Evanger's makes its own canned foods, and is blaming its meat supplier for the problem. Evanger's dry foods, which appear on our "approved dry dog foods" list in the February 2017 issue, are produced by a contract manufacturer and are not involved in the current recall.
To continue reading this article you must be a paid subscriber 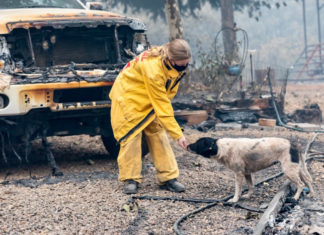 Rescue Workers From Across the Country Join the California Wildfire Animal...

Nancy Kerns
6
Last week, I mentioned that there were a number of people coming to help locally with the emergency animal shelters established here...