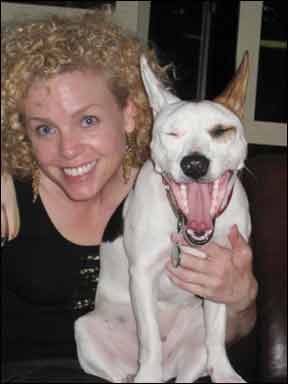 Squid almost didn’t make it to the adoption option at the Humane Society of Washington County (HSWC), Maryland. Whole Dog Journal readers who have been with us for a year or more already know part of his story: the eight-week-old Jack Russell Terrier mix was surrendered to our full-service shelter by his owners because they “didn’t have time for him.” (See “Chill Out,” WDJ May 2011.) What that really meant was that the small white-and-tan pup was a heckuva handful: they couldn’t deal with his incredibly high energy level, fierce puppy play-biting, low tolerance for frustration, lack of impulse control, resource guarding, and sudden, intense aggression when restrained. He easily failed his behavior assessment. It’s a good thing he was impossibly cute!

I arrived at the shelter on a Tuesday morning in early spring of 2011 and was met by a shelter staff member, paperwork in hand, a pleading expression on her face.

“This pup failed his assessment,” she said, handing me Squid’s paperwork. “Do you think he’d be a candidate for the Gold Paw program?”

Gold Paw was a newly launched shelter program that I helped create. It was designed to give “marginal” puppies and adult dogs a chance for lifelong loving homes. The program encouraged staff and volunteers to identify canines with adoption potential but who had one or more behavioral challenges that might make them ineligible for adoption, or significantly decrease the likelihood of success in a new home.

If a dog was accepted into the program, he was then placed in a capable foster home for behavior modification. The foster parents would work closely with me to implement a program custom-designed for each dog. For more detail about the Gold Paw program, see sidebar on next page.

Staff described Squid’s difficult behaviors, and I took a quick look at him. As a young, too-cute-for-words, otherwise highly desirable adoption prospect, Squid was an ideal candidate for the program. Only problem was, the program was so new we hadn’t yet recruited any Gold Paw foster homes. So Squid came home with me to Peaceable Paws for his behavior modification. Between me, my husband Paul, Peaceable Paws staff and apprentices, and our upcoming trainer academies, surely we could fix this pup!

We started by identifying all Squid’s inappropriate behaviors and creating a modification plan for each. Some of the pieces overlapped, so it wasn’t quite as daunting as it might appear – but it was still plenty to work on!

Everyone who interacted with him was to implement the “say please” program to reinforce self-control; Squid needed to sit to get his kennel door opened, to have his leash put on, and to gain access to toys, treats, and attention. An inappropriate puppy nip triggered an “Oops!” and removal of human attention. Because he was so inclined to puppy biting, touching was kept to a minimum unless the handler was actively working on his touch- and restraint-protocol.

Squid would live in a stall in the barn and in one of the kennels adjoining the training center. His energy and intensity were too much to add to the Miller household of five dogs and three cats – particularly too much for Scooter, our Pomeranian. Their one encounter traumatized Scooter badly enough that he suffered a life-threatening bout of hemorrhagic gastroenteritis; it took him several weeks to fully recover.

Exercise was a critical part of Squid’s program. All that energy had to go somewhere – and the best place for it was on the fields and in the woods of our 80-acre campus. Every day, weather permitting, I took Squid for at least two, preferably three long hikes; sometimes with Missy, our Australian Shepherd, and Lucy, our Cardigan Corgi, and sometimes by himself. On days we couldn’t hike, we ran him in circles with a flirt pole and encouraged him to chase toys in the barn until he was tired.

The hikes with the other dogs were good for his dog-dog socialization as well as energy draining. Lucy was particularly good at letting him know when his puppy biting was inappropriately painful – even to the point, early on, that on one occasion she snagged his ear and drew blood with a bite of her own. His bites to Lucy were noticeably less intense after that! He also joined the Miller dogs (Scooter excepted) helping with barn chores morning and night.

Time for Good Manners
Of course, basic good manners training was on Squid’s to-do list. A conveniently scheduled Level 1 Trainer Academy was the perfect venue to get him started. He was assigned to a pair of trainers who worked with him every day for a week, teaching him sit, down, come, leave it, trade, targeting, and wait. He tested the patience of his trainers with his sharp puppy teeth, but they discovered the value of using a camping food-squeeze tube for treat-delivery to a hard-mouthed pup, and did an excellent job providing him with a solid foundation for his future training.

Apprentices continued his training, dropping in on our regular good manners classes as time and space allowed, as did I, on our one-on-one hikes around the farm. During classes he began to demonstrate some reactivity to other dogs; his desire to interact with them, combined with his low tolerance for frustration, manifested as excited barking when he was restrained on leash in their  presence. Another behavior to add to his modification list!

Modification Protocols
I started Squid’s behavior modification program the day I brought him home, with a protocol designed to reduce his puppy biting and increase his tolerance for restraint (see below). We practiced this protocol for only brief periods at first, gradually increasing the duration of our sessions as he grew to enjoy touch and restraint. I also made it a point to always carry a soft toy with me, so I could occupy his teeth with the toy to forestall inappropriate grabs to skin, clothing, and leash.

In order to reinforce self-control behaviors, Squid learned “sit” as his default behavior, and we began practicing “wait.” We taught “wait for your food bowl” as a training exercise, and then had Squid wait for everything we could think of: he waited for kennel and stall doors to open; he waited for his food bowl; he waited to go in and out of the training center; he waited to take his toy; and he waited to have his leash attached. (See “Wait For Your Food Bowl,” above right.)

As Squid began to develop some ability to control his biting, we worked on teaching him to take treats gently. If the bite was unbearably hard, I would say “Ouch” in a calm tone of voice and remove my hand. If it was less hard, I would hold the treat in a closed fist and wait for his bite to soften almost imperceptibly before releasing it to him. Over time, we shaped a softer and softer bite, although as often is common with hard-biting dogs, the intensity of his bite would quickly increase again if he was excited.

Squid was clearly making good progress, but we were still concerned about his level of arousal in the presence of other dogs. He wasn’t aggressively reactive, just excited, but it was reactivity all the same, and excitement-based reactivity can easily develop into aggression as the dog matures and arousal increases, if the behavior isn’t modified. An upcoming Behavior Modification Academy was the perfect venue to address this behavior.

Trainer Bob Ryder of Pawsitive Transformations in Normal, Illinois, was assigned to work with Squid for the week. He continued to work with the touch desensitization protocol, wait, and basic good manners behaviors, but was also instructed to make a reactivity counter-conditioning and desensitization program a high priority. Bob set to work giving Squid a strong “Where’s my chicken?” response to the presence of other dogs, and by the end of the week the bright little dog was happily and politely controlling his “go see the other dog” impulse in the presence of his academy canine companions.

Squid Goes Home
Squid had been at Peaceable Paws for six weeks of intensive training and behavior modification by now, and it showed – he had become quite civilized. My husband Paul and I had grown very attached to the little guy. If it weren’t for Scooter’s intense dislike of him, he might have stayed. But we knew it would be impossible to integrate him into our household. It was time to find him a forever home.

But how? Even given his excellent progress, he needed to go to an above-average owner who would be able to continue his lessons and keep him on the straight and narrow path to adult canine civility. It would have to be an exceptional placement to meet with the high standards of the Miller Adoption Agency! I emailed his information to Jack Russell Terrier Rescue and the organizers posted information about him on their website. I also posted information about Squid on Facebook.

I received a number of applications, but none of the potential adoptors were perfect for a dog with Squid’s energy and issues. Then I received a response from positive reinforcement trainer Lydia DesRosche, in New York City. She had a client, she said, who would be perfect for Squid. Claudia Husemann had just recently lost her well-loved Doberman to old age, and was looking for a smaller “apartment-sized” dog to fill the empty place in her heart and her home.

“New York City?” Paul protested. “But Squid’s a country dog!” Nevertheless, Claudia travelled the 275 miles from New York to Fairplay, Maryland to meet Squid, and immediately fell in love. Of course! Yes, she wanted to adopt him. Her application was impeccable, and she had the added credential of already having a relationship with a committed positive trainer.

Claudia returned to the Big Apple to await the shelter’s background check and adoption decision, already making plans to move Squid into her life. Several days later, adoption approved and neutering done, Claudia drove the nine-hour round-trip again, to pick up her new boy. Squid was moving on. With tears in our eyes we bade him a sad farewell, knowing we would miss the big presence of this little dog, and knowing he was in good hands. In mid-May 2011, Squid became “New York Squiddy,” and traded the fields of Fairplay for the haunts of Central Park.

Happily, Claudia has stayed in close contact and has provided the perfect home for Squid. She keeps us posted on his exploits in Central Park. We treasure the videos that Claudia and Lydia post on Youtube and Facebook, allowing us to watch as Squid learns to ring a bell, ride a skateboard, use the Manners Minder, play with a flying disc, and more. The behaviors that caused him to fail his shelter assessment are long forgotten. Live long and prosper, little Squid!

Pat Miller, CBCC-KA, CPDT-KA, CDBC, is WDJ’s Training Editor. She lives in Fairplay, Maryland, site of her Peaceable Paws training center, where she offers dog training classes and courses for trainers. Pat is also author of many books on positive training, including her newest, Do Over Dogs: Give Your Dog a Second Chance at a First-Class Life. 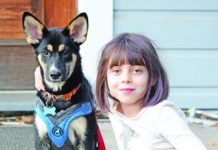 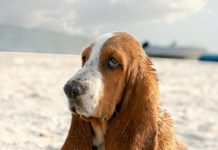 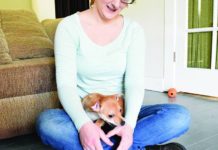