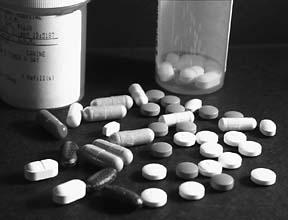 Pet pills are big business, raking in an estimated $3 billion last year and growing by 20 percent each year. Pharmaceutical companies have found they can modify human drugs for pets without much additional research expense. The Food and Drug Administration (FDA) has approved 15 new behavior-altering drugs for veterinary use in the last year and a half. The two new canine drugs receiving the biggest ad blitz and the most mainstream media coverage, Clomicalm and Anipryl, both were adapted from human drugs.

The mainstream media have run numerous stories on these “miracle cures” for destructive doggies with separation anxiety and bewildered beasties with cognitive dysfunction syndrome. But most of the coverage has focused either on the novelty of “Prozac pups” or on the business of marketing drugs for companion animals. There’s been little reporting on the medical history of the drugs or their side effects, and virtually no examination of our drug culture that believes all problems can and should be fixed with medication.

Is this emphasis on medication the best way to ensure your dog’s good health and happiness? In the face of a marketing onslaught, will pet owners take the time to examine why their dogs need pills, or will these drugs be handed out like biscuits?

Why Do Dogs Get Anxious?

Dogs are pack animals, so being left alone can be very stressful for some of them. Separation anxiety-induced misbehavior – from destructive chewing to excessive barking to inappropriate elimination – accounts for an estimated 20 to 40 percent of vet visits for behavior problems. These behaviors are also common reasons for dogs to be given up or euthanized.

Clomicalm (clomipramine hydrochloride) is the drug now being touted to help rid animals of their anxiousness. The drug, made by Novartis Animal Health, a subsidiary of Novartis, Inc., is based on the human drug Anafranil, which treats obsessive-compulsive behavior. Although the exact workings of the drug are not understood (reason enough for caution!), Clomicalm is believed to act on the central nervous system (CNS) as a selective serotonin reuptake inhibitor, or SSRI, similar to the human anti-depressant Prozac. This action reduces the clinical signs of separation anxiety. Although it can cause lethargy in some dogs, it does not function as a sedative. The drug is not designed to work as a “cure” for depressed dogs, but instead it reduces anxiety in dogs to make behavior training easier. The Clomicalm web site includes some basic behavior training tips, but refers people to their vets for more information on training.

Getting Your Dog a Proper Diagnosis

One big issue, not well-appreciated by many dog owners, is that not every misbehaving dog actually has separation anxiety, and not many veterinarians are experienced enough with behavior problems to be able to recognize and diagnose the problem – or, more importantly, be able to determine which behaviors are rooted in true separation anxiety and which are the products of poor dog training and management. Ask any professional dog trainer; few have great confidence in veterinarians’ ability to properly diagnose this complicated behavior problem.

According to the Food and Drug Administration’s Center for Veterinary Medicine, “Separation anxiety is a complex behavior disorder displayed when the owner or someone the dog is attached to leaves the dog . . . Proper recognition of clinical signs, which comes from compiling a complete patient history and assessment of the dog’s household environment, is essential to accurately diagnose and treat separation anxiety.” In other words, it’s not just any dog who trashes the house when left home alone. Plus, Clomicalm is not a permanent solution for separation anxiety. It’s designed to be used for a few weeks with training, and then the dog must be weaned off. And it has not been tested for use of more than 12 weeks, so the long-term effects are not known.

Like most drugs, Clomicalm does have its share of side effects, warnings and contraindications. Side effects noted in the FDA study include vomiting (seen in 25 percent of the dogs in the study), diarrhea (11 percent), lethargy (10 percent), increased thirst (five percent), and appetite fluctuations (three percent).

The drug is not typically used to treat aggression (certain exceptions exist), is unsuitable for male breeding dogs because of an increased risk of testicular hypoplasia, and is not for puppies less than six months old. Dogs with cardiovascular disease, narrow angle glaucoma, or a history of seizures should also not use the drug. Clomicalm is also not to be combined with other drugs that act on the central nervous system, such as general anesthetics, and should be discontinued as long as possible before elective surgery.

According to the Clomicalm website, “When used in conjunction with the Preventic collar or Anipryl tablets an undesirable reaction may occur.” That “undesirable reaction” is not specified on the site or in Novartis’ disclosure statement, but according to Pfizer’s disclosure statement for Anipryl, combining the two drugs can lead to “severe CNS toxicity including death.”

Canine cognitive dysfunction syndrome, sometimes mistakenly called senility in dogs, is commonly observed in middle-aged to older (geriatric) dogs. There is some resemblance to Alzheimer’s in some pets. Clinical signs of the disorder include increased sleep, increased restlessness, getting “lost” and stuck in a corner, wandering aimlessly, vocalizing for no apparent reason, changes in greeting behavior, changes in interaction with people, or a lapse in housebreaking.

There is no simple diagnostic test for the disorder. Rather, it’s a diagnosis of exclusion – doctors need to test for other problems such as organ dysfunction and thyroid disease to make sure these problems are not causing the clinical signs.

Anipryl (selegiline hydrochloride) is made by Pfizer Animal Health, a subsidiary of Pfizer Inc. The drug is based on Deprenyl, which is used to treat Parkinson’s disease in humans. Anipryl is a monoamine oxidase (MAO) inhibitor, increasing the levels of dopamine, serotonin and other substances in the central nervous system. It’s commonly prescribed for both CDS and pituitary-dependent hyperadrenocorticism (PDH, or Cushing’s disease). As with Clomicalm, researchers are not wholly certain how the drug actually works in the body. Anipryl’s product literature warns that the MAO system of enzymes is “complex and incompletely understood and there is only a limited amount of carefully documented clinical experience with selegiline.” Once the diagnosis is made, Anipryl must be given daily for the life of the dog, or until it is no longer effective. The drug is expensive: a one month supply for a 30-pound dog costs about $125.

Nearly 70 percent of dogs in the FDA study showed improvement in at least one symptom while being treated with Anipryl. Short-term side effects include vomiting (seen in 26 percent of dogs in the test group, although Pfizer’s literature says this may be alleviated by giving the drug with food), diarrhea (18 percent), hyperactivity (12 percent), anorexia (eight percent) and lethargy (six percent). The drug has been tested in dogs for only one to two years, so long-term side effects are not known. One of the adverse reactions, ironically, (which resulted in the dog’s dismissal from the test group) was “an increase in destructive behavior in a dog with separation anxiety.”

The Holistic View on Drugs

In his book, The Nature of Animal Healing, noted holistic veterinarian Martin Goldstein, DVM, writes that he has used Anipryl for treating Cushing’s disease. The drug “is reputed to work (for Cushing’s) indirectly by making the dog feel better – a psychological effect that may produce physical improvement.” But after seeing three dogs who suffered “unfortunate side-effects,” he stopped using the treatment.

Lost in the hype over these drugs is whether or not they’re really necessary. Most common illnesses and behavior problems dogs face can be improved with good nutrition, consistent training, and safer, natural remedies. Being advocates for our dogs’ health means not always taking the easy way out, but seeking out the cause of the problem and finding the safest way to help.

As Dr. Peter Breggin, author of Talking Back To Prozac, commented to Newsweek recently, “Instead of meeting our pets’ needs, we’ll just drug them. It used to be that we petted our dogs and hugged our kids. Now we can give both of them a pill instead.”

Without a doubt, there is legitimate medical technology that can help our dogs live longer and healthier lives. But how many of these drugs, like commercial foods and other “miracles” of modern pet care, are for the convenience of humans and not the health of our dogs? In the name of short-term convenience, will we jeopardize our dog’s long-term health with incompletely understood drugs?

Amy Carlton is a freelance writer from Oak Park, Illinois.

Gabapentin For Dogs: What You Should Know