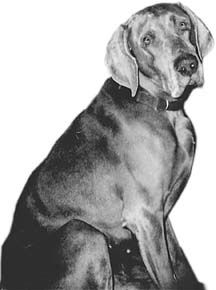 A lick granuloma is a red, raw, and ugly looking wound, caused by a dog’s incessant licking. The last thing one would think is that it can be a blessing in disguise, but it seems to have been just that for Biggie, a 10-year-old Weimaraner owned by Maryland breeders Bob and Virginia (Gini) Selner. Biggie (AKA “Wyngate’s Music Man”) is one of five dogs who live with the Selners, who breed, raise, and show their Weimaraners. Although he is a handsome and well-behaved dog, the Selners chose not to pursue a competitive career for Biggie, since he simply seemed to lack enthusiasm for the show ring. Specifically, he didn’t like having his mouth handled, and would lock his jaws closed if a judge tried to give him a quick “dentistry exam.” Instead, Biggie became a full-time companion and house dog.

Biggie enjoyed good health throughout his life, until he reached nine years of age. Then he made up for lost time at the veterinarian’s office.

In November of 1998, Biggie suddenly began licking his right hind foot. Within days, he had developed a full-blown lick granuloma, also called “acral lick dermatitis,” on the third toe of his right hind foot. The toe swelled until it was double its usual size, and became infected. The Selners’ regular veterinarian was out of town, so she took Biggie to another vet, who prescribed an antibiotic and told Gini to soak Biggie’s foot in Epsom salts.

Up to this point, Biggie’s lick granuloma was very typical. The lesions are far more common in older dogs (5-12 years of age) than young dogs, and more commonly affect males than females. Dogs of large breeds are more often affected than small dogs. Sometimes, the lick granuloma starts with another wound – a cut, infection, bruise, abcess, or an imbedded splinter or grass awn. In other cases, dogs appear to begin licking out of boredom.

In Biggie’s case, after two and a half weeks of antibiotics and soaking, the granuloma had not improved. In fact, the foot was even more swollen and looking worse.

The Selners then took Biggie to their regular veterinarian, who prescribed a different and more powerful antibiotic. They would see one of two scenarios, the vet predicted: Either they would see a positive response within a few days, or, if no response to the new antibiotic was seen, they would have to consider a surgical exploration of the “mass” in Biggie’s foot. For the next two and a half weeks, Gini gave Biggie the antibiotic, with little effect. With the prospect of surgery looming, she decided to try a very different approach; she felt she had nothing to lose.

A vet with alternatives
The Selners had heard from two of their friends about a holistic veterinarian, Dr. Judith M. Shoemaker, who had performed “near miracles” on their aged pets. Dr. Shoemaker received her Doctor of Veterinary Medicine from the University of Georgia in 1980, is certified by and has been an instructor for the International Veterinary Acupuncture Society (IVAS), and is a Founding Lifetime Member of the American Veterinary Chiropractic Association (AVCA). She is licensed in 13 states and travels extensively to both treat animals and teach alternative therapies to other veterinarians.

Dr. Shoemaker’s solo private practice is located in Nottingham, PA, where she specializes in treating sport horses, but also sees dogs, cats, and the occasional rabbit – typically when her horse-owning clients beg her to help their small companion animals. She is accustomed to having new clients come to her with stories about all the treatments they have tried which did not work. “Many people try chiropractic and acupuncture for the first time only as a last resort, when they encounter a problem that can’t be resolved any other way,” she says.

Gini Selner took Biggie to see Dr. Shoemaker on December 5, about five weeks after the Weimaraner’s lick granuloma developed. She was immediately struck by how different Shoemaker’s approach to the problem was.

First, Dr. Shoemaker took a complete health history, asking Gini about any and all of Biggie’s lifetime health problems. She also observed how he moved, on and off leash, and examined his spine.

Treatment matrix
The doctor’s treatment plan was multi-faceted. She began Biggie’s treatment with a chiropractic adjustment. Her spinal examination indicated the large dog was “out of adjustment” in multiple areas. She “adjusted” his atlas (the first cervical vertebra), the middle of his neck (the third cervical vertebra), his pelvis, and his lumbar area, characterizing these adjustments as “fixing the body’s hardware.”

Needling the granuloma
For the lick granuloma itself, Shoemaker used an acupuncture approach called “Surround the Dragon,” following the TCM theory that the lick granuloma is obstructing the flow of energy along the acupuncture meridian underlying the lesion. Dr. Shoemaker inserted several needles at a shallow angle directly into the tissue underlying the lesion. She also placed one acupuncture needle proximal (closer to the body) and one distal (closer to the toes) in relation to the lesion.

Dr. Shoemaker told Gini to expect Biggie to urinate a lot and that he might spike a fever, and if so to give him Aconitum, a homeopathic remedy. The veterinarian also prescribed a topical application of colloidal silver on the granuloma, in addition to an oral dose of 3.5 cc once a day.

Details make a difference:
A pedicure and a new collar
Dr. Shoemaker also took steps to ensure that Biggie’s chiropractic adjustments wouldn’t be effaced. She had observed that Biggie pulled hard on his leash when he walked, so she gave Gini a Halti head harness, and showed her how to walk Biggie with this device, rather than a collar (see “Leading Them by the Nose,” WDJ March 1998, for more information about headcollars). Shoemaker has observed that some dogs who pull hard on their collars can misalign their cervical vertebrae. They are unable to pull while wearing a head collar, however, which helps them maintain their spinal adjustments (not to mention their relationship with their walker!).

Finally, Dr. Shoemaker clipped Biggie’s toenails, which, she said, helps maintain the dog’s improved biomechanics. Toenails that are too long can make a dog alter his gait to avoid discomfort, which in turn can cause misalignment of the feet and joints, adversely affecting their movement and therefore the whole body. She recommended that Gini and Biggie return for a follow-up visit in 30 to 50 days, and wished the astonished owner well.

A passing “flood”
Biggie did not get a fever, as Dr. Shoemaker said he might, but on the fourth day after his treatment, he had his first-ever “accident” in the house. As Gini said, “it was a flood like a dam broke.” For the first few days, it was hard to tell whether or not the lick granuloma was improving, but by the end of a week, it was apparent that the hideous wound WAS beginning to heal. By the time two weeks had passed, Biggie had completely stopped licking his wound, and the granuloma had completely scabbed over. And by the time Biggie had his follow-up appointment in January, all the hair on his foot had grown back and the swelling was gone.

At this second appointment, Shoemaker adjusted Biggie’s spine again, but reported that none of his misalignments were nearly as “out” as when she first saw him. Dr. Shoemaker also adjusted his left hock, and several toes on his left front foot, explaining that he had strained this foot while shifting weight off his right hind when it was sore. She also clipped his toenails again.

Dr. Shoemaker was pleased; Gini Selner was beside herself with joy. The total bill for Dr. Shoemaker’s two treatments was less than $200. Today, Biggie is not only better; according to Gini and Bob, he’s better than ever! Both his owners have noticed that the big dog is much more outgoing, and loves being touched – even around his mouth and muzzle! “After a lifetime of not enjoying being petted very much, Biggie has become the classic ‘pet me, pet me!’ dog around visitors,” Gini reports. “This has been such a change, we have even entertained the idea of taking him to a show, just to see what he might do. He is so upbeat and feeling good!”

You can bet that the Selners’ “last resort” veterinarian is now the first person they run to when one of their dogs has a health problem.

Susan Rifkin Ajamian is a freelance writer from Hockessin, DE.