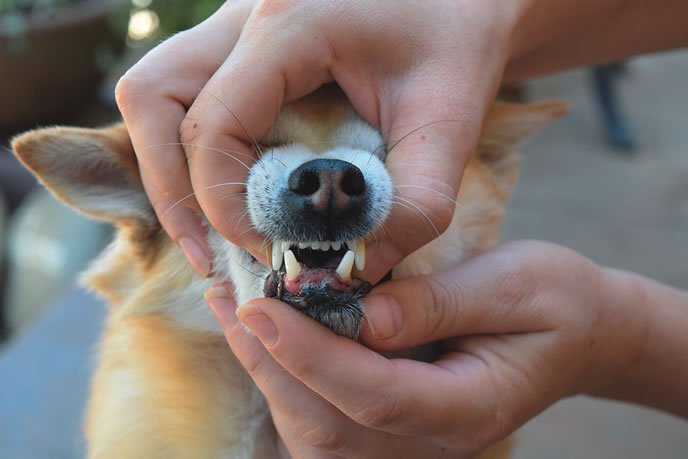 Over the millennia that humans and dogs have kept company, we’ve evolved plenty of myths about our four-footed friends—most of them flat wrong. Consider, for instance, the belief that feeding a dog raw meat will make him vicious. (Vicious, no. Longer lived, maybe.) Or, that you can’t teach an old dog new tricks. (Sure you can, especially with a clicker.) And, of course, there’s this chestnut, always a dubious comfort after you’ve been munched on by a strange canine: A dog’s mouth is cleaner than a human’s.

Fact is, dogs are probably worse off than we are when it comes to the bacteria lurking around their pearly whites. The canine mouth is considerably more alkaline than our own, and that chemistry is far more conducive to plaque formation. As a result, according to the American Veterinary Dental College, most dogs have evidence of periodontal disease by age three, in particular small breeds. And periodontal disease is the number-one condition veterinarians see in their canine patients – and feline ones, too.

As in humans, periodontal disease – an infection of the structures around the teeth, including the gum and bone – is caused by residue left in the mouth after a dog eats. The bits of food create a sticky film over the teeth called plaque. Minerals in the saliva cause the plaque to harden, forming calculus, or tartar. As the plaque and calculus spread below the gum line, where they are not visible, bacteria begins to damage the gum tissue. Ever on guard against invaders, the body sets off an immune response: White blood cells are dispatched to the area, and they in turn release enzymes that do still more damage to the gum tissue and bone around the teeth. Eventually, without a solid bed of bone to anchor them, the teeth will need to be removed.

There are even more frightening long-term repercussions of allowing periodontal disease to take root, especially in older dogs: The bacteria in the mouth can get into the bloodstream, travelling to other parts of the body, where it can create life-threatening infections. For this reason, many veterinarians are reluctant or downright unwilling to perform surgery on a dog with significant periodontal disease until the condition is brought under control.

Board-certified veterinary dentist Dan Carmichael, who works in the metropolitan New York area, says the best thing you can do to maintain or improve your dog’s oral health is to follow the same advice your own dentist gives you: Brush every day.

Dr. Carmichael recommends using a soft-bristle toothbrush made for either humans or canines – he doesn’t have a preference. He’s also not particularly concerned about what kind of toothpaste you use, as long as it is formulated specifically for dogs. Human toothpaste is entirely inappropriate for dogs, as it is not intended to be ingested, and dogs have yet to master the intricacies of the bathroom Dixie cup. Also, its minty flavor is entirely unappealing to canine palates, which is why the non-foaming canine version comes in flavors such as poultry.

While conscientious human brushers make an effort to reach every nook and cranny in our own mouths, you don’t have to be that exacting with your dog. “Just focus on the outside surfaces of the teeth,” Dr. Carmichael advises. “Just do the surfaces you see when you lift up the lip.” The most common areas where plaque tends to accumulate are on the outside of the canines, or “fang” teeth, as well as the big molars at the back of the mouth, which are used for chewing.

While you are brushing, take note of any abnormal growths, especially along the gumline, as well as unexplained bleeding in the mouth. Share any concerns with your vet, who will want to rule out oral cancers.

Busy schedules can mean that you might occasionally skip a day of tooth-brushing with your dog. But being more lax than that is counterproductive. “Recent research suggests every other day is still beneficial,” Dr. Carmichael says. “But anything less than that is worthless; it’s no different than not brushing at all.”

Desensitize Your Dog to the Toothbrush

Of course, before you even attempt to brush your dog’s teeth, be sure to introduce the idea, slowly and positively. Having a foreign object stuck in his mouth and then wiggled around it isn’t a natural sensation for any dog.

The sooner he is introduced to the idea, the better. “Like any training procedure, starting as a puppy develops good habits,” Dr. Carmichael says. “You definitely want to incorporate positive reinforcement.”

Set aside a few seconds each day to slowly desensitize your dog. Start with touching the outside of her mouth. Then segue to putting your toothpaste-dotted finger briefly next to her gums. Move on to swirling and rubbing the gumline with your finger. When she’s comfortable with that, switch to the toothbrush, only for a few seconds at first, and then building up to longer periods. Be sure to copiously praise and reward your dog for her cooperation in each session. Making brushing part of her daily routine will also help your dog acclimate to the process.

Of course, if your dog shows any signs of intense discomfort or aggression – including stiff body posture; a similar tightness at the commissure, or corners of the mouth, and widened eyes – do not force the issue. Instead, consider seeking help from a professional positive trainer. You might have a bigger problem than just a reluctant brusher.

While brushing your dog’s teeth is the gold standard for keeping them free of plaque, Dr. Carmichael acknowledges that there are situations where it’s just not possible, whether due to your dog’s reluctance, your own schedule, or any number of other factors. In those cases, he notes, certain treats have been shown to be effective in reducing plaque.

The Veterinary Oral Health Council maintains a list of products that have earned its seal of approval. The list includes certain types of rawhides and chews, as well as specially formulated dental gels, sealants, and water additives. See the VOHC website here.

Dr. Carmichael is not necessarily an advocate of raw food diets, but he acknowledges that there might be some benefit to dogs chomping through non-load-bearing bones such as chicken necks and wings; raw feeders who do feed whole raw bones swear to the teeth-cleaning results they provide. Others, however, opt to grind the bones or purchase a commercially prepared raw diet to avoid impaction or perforation, which is a risk with “gulpers” who do not adequately chew the bones before swallowing. Regardless of how or what you feed, Dr. Carmichael believes brushing is an important part of daily oral care for your dog.

So is being tuned into to the slightest changes in your dog’s body language and habits. The most common symptom of periodontal disease in dogs is to have none at all, because of how stoic most dogs can be in the face of pain. Subtle signs can include a noticeable increase in the amount of time it takes for the dog to eat his meal, his avoidance of chewing on one side of his mouth, avoiding hard portions of his meals in favor of softer food, and bad breath.

Dr. Carmichael says that starting at age three, most dogs could benefit from a yearly professional cleaning performed under anesthesia by a veterinarian, though he notes that the timeline is based on the individual dog, and can be affected by things like genetics and the owner’s poor brushing habits.

A typical cleaning, which removes plaque and calculus from the exposed portions of the teeth and below the gumline, lasts about 45 minutes. Many owners are understandably concerned about the risks of anesthesia for their dogs, particularly older ones. Dr. Carmichael notes that “with modern anesthesia, even dogs with mild versions of heart or kidney disease can undergo anesthesia safely.”

In recent years, there has been a growing movement toward anesthesia-free cleanings, in which plaque is removed without sedation, sometimes by trained veterinary technicians. We don’t recommend these procedures, and neither does the American Veterinary Dental College, referring to them as “non-professional dental scaling.” The College notes that the sharp tools used could injure both patient and operator if the dog moves suddenly, and that there is a risk of being bitten. Additionally, “access to the subgingival area of every tooth is impossible in an unanesthetized canine or feline patient,” the College notes on its website, referring to the area below the gumline. “Removal of dental tartar on the visible surfaces of the teeth has little effect on a pet’s health, and provides a false sense of accomplishment. The effect is purely cosmetic.”

If you do opt to have your dog undergo veterinary dental cleanings, you might decide to consolidate requests and have the veterinarian also clip his nails or remove a few warts or skin tags. But beyond those few minor procedures, Dr. Carmichael does not recommend “double-dipping” with a major surgery. “Combining an orthopedic or other major surgery with teeth cleaning is often not wise,” he says. “It makes it too long under anesthesia, and the potential bacteria that can be released would not be good if there was an intra-abdominal procedure,” such as a spay, for instance.

If you want to get a veterinary dentist going, talk to him about marrow bones.

“Everybody’s grandfather gave their dog a bone,” Dr. Carmichael says. “But I think the majority of teeth that I’ve seen broken have been on those big beef bones, or knuckle bones.”

In addition to real “butcher” bones, products made out of nylon are also potential tooth crackers. And the recent popularity of shed moose and deer antlers repurposed as chews sets Dr. Carmichael’s own teeth on edge.

“I walked into a pet store last month and saw this whole aisle of different-shaped antler treats,” he says. “Every single one of those is a broken tooth waiting to happen.”

The problem, he says, is the sheer hardness of the bone or nylon. “It’s just the natural bite force of the dog, which is strong. If they have something that’s as hard or harder than the tooth, something’s got to give. It’s going to be the antler, or the tooth, or both.”

Some dogs, he says, seem to know to be careful with the bones, avoiding “chomping” down on them with too much pressure. “But I cannot predict which dogs won’t” be that self-aware, he cautions.

As a substitute, Dr. Carmichael recommends hard rubber toys, such as Kong toys, as well as various rawhide chews.

For most dog owners, paying attention to what’s going on in your dog’s mouth is a crucial first step. Dr. Carmichael frequently reminds owners that the most common sign of a problem is no symptoms at all.

“In nature, dogs survive by not showing weakness, so it’s in their nature to mask their problems,” he says. “If a male wolf is complaining about his tooth, he’s not going to be in that pack for long.”

That’s why the humans in a dog’s life have to be proactive in finding oral problems, before they get too big – and too painful.

Does Your Dog Have a Mold Allergy?