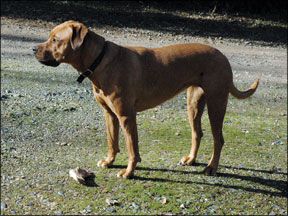 Thank you for saving my dog’s life. I had read “What Promotes Bloat?” in the January 2005 issue. The article made a huge impact on me because it described the alarming way that a perfectly healthy dog would die within minutes/hours from a seemingly random act. With bloat (also known as GDV, for “gastric dilation and volvulus”), instead of passing gas normally, the dog’s stomach twists, cutting off blood supply to the entire area.

In subsequent issues, there have been occasional letters to the editor thanking Whole Dog Journal for the article and for saving a dog’s life. Those letters kept the memory of the disorder fresh in my mind.

So, when my dog Nick came back from his post-dinner walk gagging up foam, I touched his belly and it was as tight as a drum, I thought, “He’s got that thing!” I called the vet, grabbed my purse and my back issues of Whole Dog Journal, loaded Nick in the car and raced off.

I found the article on GDV while my friend drove, confirmed my suspicions, canceled the vet appointment, and instead went to an animal emergency hospital where they had a surgeon ready.

When the surgeon warned me of the slim likelihood of success, I had an overwhelming feeling that Nick was going to be okay. During the operation, I visualized great things about Nick’s recovery and I mentally drafted my letter of thanks to you.

The surgeon was exceedingly surprised that Nick’s surgery was so successful. She said that my prompt diagnosis and action saved Nick’s life, but I couldn’t have done it without you. So again, I thank you, and I hope my letter reminds Whole Dog Journal readers about GDV and saves another life.
Maureen Ragan
Baltimore, MD

Sheesh! That’s a letter I have to print! I’m so glad Nick is well.Every dog owner should be familiar with the classic symptoms of bloat/GDV, which include the following:

•Unproductive vomiting
•Apparent distress
•Distended abdomen, which may or may not be visible
•Restlessness
•Excessive salivation/drooling
•Panting
•The dog’s stomach feels taut to thetouch, like a drum
•Pacing
•Repeated turning to look at flankand/or abdomen
•Owner feels like something just isn’t right!

Don’t forget that many owners of large-breed dogs (the most frequent victims of GDV) swear by an over-the-counter anti-gas product called Phazyme for emergency (and interim) use when bloat is suspected – to be given on the way to the veterinarian’s office. Phazyme is the brand name of gelcaps containing simethicone, a gas remedy for humans.

While some veterinarians demur, worried that the dog’s consumption of anything could be aspirated (enter into the lungs) when the dog is bloated, others agree that anything the dog can be given to reduce the build-up of gas in his stomach will help. Talk to your veterinarian about using this remedy as an interim treatment for a suspected case of bloat.

I decided to try coconut oil for my Olde English Bulldogg after reading “Crazy About Coconut Oil” (October 2005). Since we rescued him, my dog has had terrible dandruff that did not respond to several different dandruff shampoos. His shedding was worse than my Frenchie and American Bulldogs, combined.

I began including one, then two, teaspoons of virgin coconut oil in his food daily, about one month ago. He loves it. His dandruff has completely disappeared, and his shedding is about 10 percent of what it used to be. I wouldn’t have believed such a quick response if I hadn’t seen it with my own eyes.

Bulldogs have so many health problems I’m not sure it’s fair to keep breeding them, but anything that helps is really appreciated. Thanks to your magazine for intelligent suggestions!
Ellen Cooper
Via e-mail

The April issue devoted a whole article to the potential benefits of lemon balm for dogs (“It’s the Balm!”), but I was dismayed to discover that the invasiveness of this popular herb was mentioned only in a brief aside. As a botanist, I am pleased about your efforts to promote your readers’ interest in plants, but I am hoping you will also pass on detailed instructions on how to prevent these same plants from becoming a danger to the native plant communities across the U.S.

Readers who choose to grow lemon balm should be encouraged to keep it in a pot, rather than transplanting it to the yard, and they should never allow it to flower. Keep an eagle eye on the plant and give it a severe “haircut” as soon as you notice any buds. As a member of the mint family, it will grow back quickly even if you cut it to the ground.

Rather than putting flowering lemon balm branches or plants on the compost, these should go into the garbage or be burned. Once your lemon balm sets seeds, young lemon balm plants will spring up across the neighborhood in the most unlikely (and often undetected) locations, and from there it is just about impossible to put this genie back into the bottle.

Just as responsible pet owners will not allow their pets to populate the neighborhood with feral offspring, we need to keep invasive plants safely under control. Readers who can’t closely supervise their lemon balm should be advised to buy their supply from responsible growers instead.
Catharina Coenen
Pennsylvania

CJ Puotinen, who authored our article on lemon balm, agrees. “Lemon balm grows so well, that where conditions favor its growth, it can take over. In parts of Oregon, it has been listed as a medium-impact invasive weed. Lemon balm enthusiasts should keep their plants spayed, neutered, and on a short leash by planting lemon balm in pots rather than in the ground (to prevent spreading roots), prevent it from flowering by keeping it cut back, and by disposing of flowering stalks that may contain seeds instead of composting them.”

Your editorial in the April issue was really interesting. My dog has been yelping occasionally as well, and sometimes limps and walks gingerly and other times seems fine and peppy. Since this behavior is recent, I took her to the vet to get checked out, but the x-ray showed no fractures or arthritis. The vet thought she showed sensitivity in her lower back when she was pressing down on it, but had no further recommendation than to keep an eye on her. I’d be really interested in a chiropractic exam; would you be able to name the practitioner you mentioned in the article?
Lana Martin
Sacramento, CA

Since the chiropractor who helped Mokie already has a very busy practice, and does not see small animals out of her immediate area, I didn’t want to list her number and unleash a torrent of calls on her. There are many talented veterinary chiropractors; you can contact the American Veterinary Chiropractic Association (AVCA) for information about practitioners near you. Call (918) 784-2231 or see animalchiropractic.org.

I was surprised to read “Don’t Bite on the Veggie Dog” in the April issue. My daughter’s Collie has been on a vegan diet for more than three years. She is seven years old and healthy. Our vet is amazed and has done bloodwork, etc. It is common knowledge that if you choose a vegetarian diet you need to supplement.
Nancy Bersani
Milton, MA

In our opinion, and that of the nutrition experts we most respect, dogs should eat biologically appropriate diets. There is no such thing as a vegetarian or vegan wild dog. We don’t think that dogs who can eat animal products should be denied them for reasons relating to the owner’s ethical or philosophical values. Formulating a “complete and balanced” vegan diet for dogs is far more difficult than feeding an animal-based diet, partly because there is a great deal more research and anecdotal evidence about “what works”

regarding animal-based diets for dogs than there is for vegan diets. That said, we are aware that a very few dogs are allergic to or intolerant of animal proteins and fats; these dogs can clearly benefit from a diet that excludes the problematic ingredients, yet contains appropriate and balanced amounts of the protein, fat, vitamins, and minerals that dogs require.

I just received the May issue and wanted to respond to the letter complaining that you don’t provide your “top foods” lists for free on your website. As you pointed out, you don’t sell advertising – a practice I applaud.

I couldn’t disagree more with the writer’s opinion that Whole Dog Journal cares “more about profits than saving the lives of dogs.” From your in-depth articles about wholesome foods to the excellent articles on humane, joyful training, it is clear that you put dogs at the very top of your priority list. Anyone with an ounce of sense would understand that in order to gather this information and make it available to dog owners, you need to have financial support.

Like most of your readers, I want to do the best I can for my dogs so that they enjoy long, healthy lives. Other dog publications, while at times informative, include too many articles about irrelevant topics such as dresses and jewelry for dogs and the majority are at least 50 percent ads.

I’ve been a subscriber for five years and keep every issue. I’ve always deeply appreciated the information in Whole Dog Journal but with the recent, widespread pet food recalls, I feel more than ever that Whole Dog Journal is a potential lifesaver.

I’m sure that you don’t crumble in the face of the occasional criticism – this is obvious by your publishing that letter – but I wanted to take a moment to let you know that your efforts are appreciated and the price of a subscription is well worth it.
Yogi Cutitta
Salem, MA

I really appreciate your warm words; thanks so much. – Editor 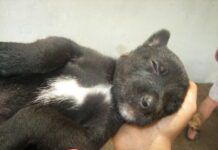