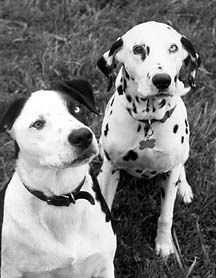 Ask the average dog owner about fasting her dog and you may see her blanche at the very idea of making Skippy miss a meal. In a culture that is obsessed with food, it is easy to understand a conscientious dog owner’s reluctance to deliberately withhold sustenance. Yet many dog owners routinely do just that.

We interviewed a number of dog owners who utilize fasting protocols in their feeding regimens. Some had more than 10 years of experience with periodic fasts, and some had started recently fasting their dogs only recently. Often, the fasting was used in conjunction with a natural diet. Almost all the people we interviewed reported improvements in their dogs’ health and attitude as a result of the fasting.

What is a fast?

One definition of fasting is “complete abstinence from food and drink.” This is what your veterinarian means when he tells you to fast your dog prior to surgery, and we can understand why Skippy’s owner blanches at the thought. However, this traditional definition is not what most vets and dog owners mean when they talk about fasting dogs for health reasons. In this article, we are discussing what is sometimes called “modified fasting,” and typically involves eliminating solid foods and taking all nourishment in liquid form – broth, juice, or water.

Humans who periodically fast often report increased energy, mental clarity and spiritual uplift. Many of the world’s great thinkers reportedly fasted regularly: Jesus, Plato, Aristotle, Confucius; Hippocrates, Leonardo da Vinci, and Ghandi, to name a few. Water, broth and juices are low in fat and easy to digest, freeing up energy for other purposes, including healing and thinking. While our dogs may not be interested in the spiritual effects of fasting, they may well benefit from the health-related ones.

Giving the body a break
Many of us have long been aware of the value of fasting a dog with diarrhea for 24 hours in order to give the irritated bowel a chance to rest and empty itself of whatever noxious substance caused the problem. According to Dr. Pat Bradley, holistic veterinarian in Conway, Arkansas, the benefits of fasting go far beyond soothing a queasy digestive tract.

“Overall,” says Dr. Bradley, “fasting is a great routine practice for almost every animal. You know how sluggish and uncomfortable you feel after eating a large meal? It takes an enormous amount of energy to digest food. When you fast – or your dog fasts – that energy can be used elsewhere in the body for healing and cleansing.”

Dr. Pitcairn’s Complete Guide to Natural Health for Dogs & Cats, by Richard H. Pitcairn, DVM, Ph.D, and Susan Hubble Pitcairn, concurs with this opinion of fasting commonly held by holistic practitioners: “An occasional day of fasting relieves the digestive tract of its usual duties and frees the organs to break down toxins stored in the liver, fats and other tissues. During a fast, the organs can also consume excess baggage, such as cysts, scars and growths.”

Dr. Bradley has found in her practice that in addition to getting rid of toxins, energy saved during fasting that would normally go toward digestion can be used to heal wounds, restore damaged tissue, and fight acute viral and bacterial diseases. She feels that fasting can also improve an owner’s relationship with her animals. Her own dogs, she says, are exceptionally friendly on fast days. They make a greater effort to engage her, and she responds by spending extra time with them on those days, bathing, brushing and playing with them.

Dr. Bradley also stresses the importance of tailoring a fasting program to the needs of the individual animal and owner.

“I’ve seen some pretty dramatic improvements in everything from digestive problems to viral diseases, upper respiratory infections and skin conditions as a result of fasting,” she says. “At the same time, I’ve had some cases where it didn’t help at all. Like every treatment protocol, you have to monitor results and be ready to try a different approach if the fast isn’t having a positive effect.”

Not so fast . . .
Deb Kidwell, of Rhoadesville, Virginia, has had less than positive experiences when she has experimented with fasting her dogs on numerous occasions over the past 10 years.

“When fasting my dogs,” she reports, “they became very aggressive and temperamental with each other. Short tempered spats and large big fights were the norm, unless I separated them out in groups of twos and kept them outside. Also, I had problems with vomiting of bile.”

Dr. Bradley acknowledges that there can be less then pleasant manifestations of the effects of fasting, but says that emotional upsets should not be a problem.

“I caution my clients before they begin fasting their dogs, that they may see some evidence of the body ridding itself of toxins,” she says. “These can include really loose, mucousy, foul-smelling stools; urine with a strong odor; vomiting bile; eye and ear discharges; and sleepiness. If the owner hasn’t been warned in advance, these can be pretty frightening.

“Aggression is not the norm during fasting,” she insists, “nor is a frantic level of energy. When they do occur, they may be signs of underlying health problems such as hyperthyroidism or blood sugar abnormalities. If I were to see these problems as a result of fasting I would perhaps want to conduct lab tests to see if there was something else going on for that dog. If it’s not a health problem, then I would probably refer the client to a behaviorist to determine if it is a relationship problem. Obviously, aggression can frighten (or injure) an owner, and can be seriously damaging to the canine-human bond. In that case, the benefits of fasting clearly would not outweigh the risks of destroying the relationship.

“Even if a fast is unsuccessful,” says Dr. Bradley, “it can give me a lot of information, about the dog, the owner and the relationship between the two.”

According to Dr. Bradley, if a fast doesn’t work it may be because the owner has intensely emotional food issues. If an owner equates food with love, then withdrawing food from a cherished dog is the same as withdrawing love. This can be a red flag to a veterinarian to be on guard for obesity and other food-related health problems. The vet might need to work toward gaining the client’s trust slowly regarding food issues, by discussing more gradual approaches to fasting in the context of a more healthy lifestyle overall, such as feeding slightly less, providing more exercise, occasionally skipping one meal, and feeding a better quality of food – more raw food, with more organic material.

Who shouldn’t fast?
“I’m pretty cautious not to get on my fasting soapbox all of the time,” says Dr. Bradley. “While I believe that fasting can be very useful, I don’t insist on it for all of my clients all of the time.”

Dogs who shouldn’t be fasted include:

• Very young dogs (under a year) because they are still growing and developing rapidly and need the regular nutrition.

• Very old dogs – although “old” varies from one breed and one individual to the next.

• Pregnant or lactating bitches (they are a nutrition source for growing puppies).

• Dogs on any kind of medication – such as diabetic dogs on insulin – whose systems need constant monitoring.

“In fact,” Dr. Bradley cautions, “I recommend that unless someone is very experienced, any ventures into fasting should be done under the close guidance of a veterinarian. Absolutely a vet needs to be closely involved if the fast is longer than 24-hours and being used for the purpose of treating disease.”

Anecdotal evidence
Allopathic medicine is big on scientific evidence, and while mainstream nutritionists may scoff at claims that fasting rids the body of toxins, they have a harder time arguing with a 1993 study at Ben-Gurion University in Israel that found that fasting significantly increases levels of HDL (high-density lipoprotein) – the “good” cholesterol that protects against heart attacks in humans. Meanwhile, holistic practitioners are more willing to accept some things on faith and the results they see before their very eyes. Dog owners polled on the Wellpet and APDT (Association of Pet Dog Trainers) e-mail lists overwhelmingly describe positive results of regular fasting for their dogs. Most follow a once-a-week, 24-hour modified fast, with unlimited access either to water or broth, and some with access to raw bones and maybe a biscuit at bedtime. Here are some of their comments:

“The dogs seem to do better, and all are eager eaters. They hold weight well and stay in good condition. Their stools are consistently good.”

“I believe it more closely mimics how an animal in the wild would eat – plus I feel it helps the dog get rid of built up toxins. With my dogs it seems to promote good health and weight control.”

“It makes perfect sense – after all, food isn’t readily available in the wild, so I follow nature’s way of cleansing and resting the body. My dogs don’t even seem to notice they are going a day without meat, bones and vegetables. They remain active, in fact more active, and they seem to appreciate the break. You don’t have to be a raw or home-cooked feeder to fast your dogs; I think it is even more important for people feeding processed food to provide a weekly fast.”

“There is a big improvement in coat quality. Behaviorally, my Sheltie, “Paisley,” is not as prone to freeze up when he is uncertain, and he does not display the high degree of fear to loud sounds that he used to.”

“When I started feeding raw diet I had a five-year-old Rough Collie who suffered frequent bouts of idiopathic diarrhea, chronic sinusitis and bladder infections, fibrous histiocytomas in her eyes, corneal distrophy, lenticular sclerosis, frequent vomiting of yellow bile if she wasn’t fed four times a day, and hypothyroidism. Her eyes started to clear within three weeks of changing the diet and fasting. And the rest, except for the hypothyroidism, is history.”

If you haven’t already, it might be time to get your dog on the fast track. Consult with a veterinarian who approves of fasting, find the protocol that works for you (see sidebar), and give it a try. While you’re at it, maybe you’ll want try fasting yourself. You never know; maybe you’ll become the world’s next great thinker . . . or maybe your dog will!