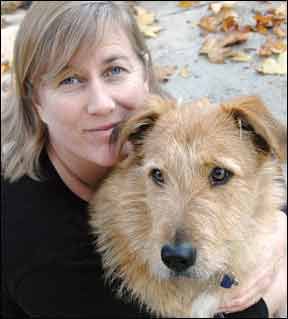 A bout 12 years ago, my aged Border Collie, Rupert, developed a serious cardiac condition: ventricular tachycardia. The cost of the diagnostics and treatment was expensive, but less than half the price at the vet school at the University of California, Davis, than it was at the office of my local veterinary cardiologist, so Rupe and I made the three-hour (round-trip) drive from our house in the San Francisco Bay Area as often as we needed.

I lost track of the number of trips we took. The goal was to stabilize Rupie’s heart rate through the use of a medication. The veterinary cardiologist started Rupe off on a high dose, which controlled the tachycardia. But when we tried to reduce the dose in stages, the accelerated heart rate would return. Each time we changed the dosage, we’d wait a few days and then return for an ECG.

Eventually we got Rupie stabilized on a combination of the medication prescribed by the cardiologists – and the hawthorn tea I brewed for Rupert daily on the advice of my holistic vet. The cardiologists probably thought I was crazy, but when I stopped the tea (and the medication amount was stable), the tachycardia returned. I put him back on the tea, and the tachycardia stopped. There were two cardiologists who saw Rupert at UCD; neither one was interested in or opposed to the tea. Their attitude was sort of, “Whatever makes you feel better.”

Well, it did make me feel better (and I think it played an important role in stabilizing his heart rate, too). Every morning, I poured near-boiling water over a few teaspoons of dry hawthorn berries and let the teas steep until cool. Then I strained the berries out and poured the tea over Rupert’s food. It had a mild flavor that he didn’t mind a bit.

The tea-brewing became part of my family’s routine. I started choosing black tea over coffee. Then my son started asking for tea in the morning, too; he liked sweet slippery elm tea, which soothes sore throats. My step-daughter Katherine came to stay with us for the summer, and while she never developed a tea habit herself, she was amused by the ritual brewing of tea for the dog, me, and Eli.

One day, the four of us took a trip to UCD for one of Rupert’s checkups; I bribed Eli and Katherine with the promise of something fun on the way home. But when we were in the waiting room, I started to regret bringing the kids. Vets were running around attending to several emergency cases, and there were a number of emotional owners weeping. Rupert was fine; he was scanning the hallway for his favorite cardiologist, who always had cookies for him. But there was a little Poodle sitting next to us who was shaking and panting and looking like she might expire on the spot. The kids’ eyes were wide and they were uncharacteristically quiet.

Then Katherine said something to Eli, and he giggled a little. “What?” I asked. “I said, somebody should get that dog some tea!” said Katherine. “Yeah,” piped up Eli. “Get that dog some tea, STAT!” (I seem to recall we were all watching the TV show “E.R.” a lot in those days.) Katherine went a little further. “Nurse!” she commanded in an imperious way, “Stop what you are doing and GET THAT DOG SOME TEA!”

This little bit of comedy was enough to get us out of the waiting room and eventually, out of the hospital, without further trauma. And “Get that dog some tea!” became both a family punch line and frequent advice – only these days, I brew rose petal tea to calm the anxious dogs I frequently foster from my local shelter. It works; see CJ Puotinen’s article on page 12 for more details.
Give it a try! STAT!