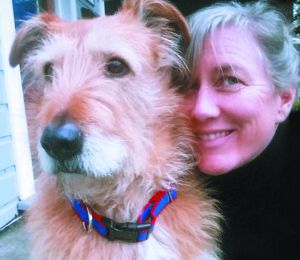 I’ve been fostering a very special scruffy-faced pup for a little more than two months now. It pains me to say that, while I truly do love him to pieces, I am still on the fence about whether or not to keep him.

I’ve justified his extra-long stay here with a couple of different excuses. At first, it was because I wanted the chubby, wobbly puppy to lose a little weight and develop a little muscle; it seemed like he had trouble with his knees. I thought it would be best to be certain that his lack of strength and coordination was simply due to a lack of opportunity to exercise and not some serious abnormality that should be addressed or corrected before we tried to find him a home. I wouldn’t want him to get placed with someone who had neither the time nor resources to fix whatever problem he might have.

He was so much bigger and thicker than the litter of 11 unrelated pups I was also fostering, and didn’t appear to be any particular breed or type, so I went ahead and ordered a mixed-breed DNA test for him. I told my husband that since we had no clue about his breed, we’d have a hard time telling prospective adopters how big he might become. I told my friends that I was waiting for the results before promoting him for adoption, so I could better represent him as something or other, to make sure he ended up in a home that was appropriate for his size.

The litter of 11 all went back to the shelter and got adopted, he slimmed down and muscled up, and his legs started looking fine. The DNA tests results came back and indicated he’s going to be a medium-large dog. According to Wisdom Panel, he’s (in descending order) American Staffordshire Terrier, American Pit Bull Terrier, Boxer, German Wirehaired Pointer, American Bulldog, English Springer Spaniel, Great Dane, Australian Cattle Dog, German Shorthaired Pointer, Labrador, and  In other words, medium-large.

Then, my husband and I were leaving for a week’s vacation, and I didn’t have time to show him to anyone before we left, so he stayed with my sister-in-law and niece while we were gone. (They fell in love with him, too.) When we got home, I was busy doing all the things that pile up while you’re away on vacation, which meant no time to schedule any meet-and-greets.

Though my stated reason to not keep the puppy has been to give Otto, my 14 1/2-year-old dog, a peaceful last year or so, the puppy hasn’t really been bothering Otto at all. Help! I’m running out of excuses!