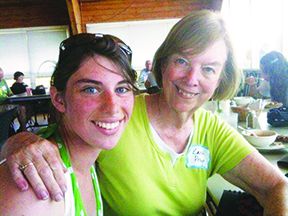 I recently had the great pleasure of meeting and interviewing Karen Pryor, who, more than anyone else, pioneered and popularized force-free animal training with the publication of her 1985 book, Don’t Shoot the Dog! At nearly 81 years of age, Pryor continues to inspire people in every behavior-related field to give these kind, respectful techniques a try.

I was searching online for photographs of Pryor to accompany the article and interview with her (starting on page 8) when I came across the picture below. I clicked on the photo’s link – a 2009 article in an online newsletter from Cornell University; I was curious about the identity of the bright-looking young woman in the photo with Pryor.

The story in the newsletter was about a high school student, Lily Strassberg, a junior at Newton (Mass.) South High School, who was taking a summer course in Marine Environmental Science at Shoals Marine Laboratory, Cornell’s marine field station. The course required each student to design and carry out a scientific study.

Strassberg, a dog fanatic, had recently read Karen Pryor’s most recent book, Reaching the Animal Mind, which describes many training examples from Pryor’s long career with animals. One anecdote in the book recounted Pryor’s effort to train a hermit crab to ring a bell on cue. Strassberg decided that her project for her summer science course would be to attempt to replicate Pryor’s feat with a local crab species: Carcinus maenas.

For the longer version, read the story for yourself at http://news.cornell.edu/stories/Sept09/crabRingsBell.html. The URL gives the story away; to the amazement and delight of the instructor and her classmates, it took Strassberg just three days, a clicker, and some mussel treats to teach the crab to ring a bell on cue.

Strassberg was a work study student; she was working off her tuition for the summer courses she was taking at the Shoals lab by cleaning dorm rooms and helping in the cafeteria. A week after her bell-ringing crab presentation, she was helping serve lunch to a group of alumnae who were touring the lab when she realized she was face-to-face with her idol, Cornell alumna (class of 1954) Karen Pryor, who just happened to be on the tour of the marine lab that day.

When I tracked down Strassberg, to see if I could use the photo I had found online, Strassberg described the moment to me: “I looked over at her name tag and made a flat-out fool of myself when it registered. I flipped my chair back and literally screamed ‘Oh my God are you Karen Pryor?! Your book changed my life!’ ”

Since that chance meeting, Strassberg has become “great friends” with Pryor; they’ve met a number of times, including at last year’s conference of the International Association of Animal Behavior Consultants.

Strassberg has since volunteered and worked at a number of shelters and groomers, interned at Duke University’s Canine Cognition Laboratory last year, and is currently majoring in animal behavior studies at University of Massachusetts, Amherst. She’s a perfect example of the bright future of positive, passionate, educated dog trainers that Karen Pryor referenced in her interview with me, weeks before I even knew Strassberg existed. And I can’t help but think that Pryor should take great pride in knowing that she has helped inspire trainers like Lily Strassberg.