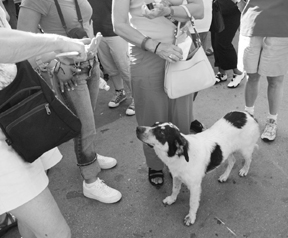 The highlight of my summer vacation (two weeks in Italy and Greece, accompanying my 13-year-old son on a school-related trip) was observing the feral dogs in the ruins of the ancient city of Pompei. I did learn a little history as we strolled through streets that were buried under ash and lava in A.D. 79, and have been progressively excavated since 1748, but I can admit to you that mostly I was dog-watching.

As every tourist bus pulls into the lot just outside the visitors entrance to the city, dogs run to greet the people getting off the bus. There are dogs of every mixture and size, but they share one attribute: they are irrepressibly friendly. WDJs Training Editor Pat Miller has frequently told us that dogs do what works for them, and this was crystal clear in Pompei.

As dogs ran up to the kids and adults in our group, wagging their tails and pressing their heads into our legs, most of the people responded, Oh! How cute! (Interestingly, not one of the dogs jumped up; they tended to come right to your front and sit or stand politely facing you.) In response, at least half the people hunkered down and wrapped their arms around the dogs, rubbing their ears. The dogs zeroed in on these people, attaching themselves firmly to the most demonstrative  and ignoring the ones who ignored them!

Then, naturally, people started going through their purses and packs, looking for food they could share with their new best friends. When one or two dogs tried to steal treats that were being handed to other dogs, the justice was lightning-fast, as the top dogs snarled and snapped, and then just as quickly, replaced the snarls on their faces with amiable expressions for our benefit.

A group of about six dogs followed our group for a couple of hours. Then, obviously aware that most of us were out of treats, they vanished. An hour later, on the way out, we saw our dogs attached to a new, freshly stocked group of tourists.

Some anthropologists have postulated in recent years that dogs probably domesticated humans, rather than the other way around. This hypothesis seemed to me an absolute fact as I watched the dogs in Pompei. To a person, the humans seemed completely clueless that they were being worked, or fished, quite professionally, for the dogs daily sustenance. The people instinctively responded emotionally to the dogs cute and seemingly affectionate overtures, but for the dogs, it was all about survival.

Also fascinating to watch were the interactions among the dogs. The postures, gestures, and vocalizations they used to communicate with each other were much more animated and frequent than those of our household dogs, probably because a lot of normal dog/dog interactions alarm us! It made me realize that we seriously handicap our dogs ability to communicate with each other by insisting that they behave and suppressing their natural expressions. Imagine trying to settle family disputes without being allowed to speakor even gesture.