Hello! Here’s a reminder to update your contact information on your dog’s tags or collars – and with your dog’s microchip registry. Have you moved? Changed phone numbers? Is there a number that you could add to the registry as a backup?

Two stories from this week have inspired this reminder:

I took a siesta the other day (that sounds cooler than a nap, right?). When I woke up, I looked at my phone and saw six missed calls from one out-of-the-area area code and three missed calls from another number in that same area code. As I mulled over that information, the phone started flashing (I had the ringer off) with an incoming call from one of those numbers. Shoot! What is happening? I answered with trepidation.

A very upset-sounding person responded, “I have your dog here, and it was in a fight, and it may have taken the other dog’s EYE out!”

I jumped out of bed and dashed into the living room. Both of my dogs looked up from their respective couches, where THEY were having a siesta. Whew!

I said, “I live in Oroville, and both of my dogs are with me. But I work with several rescues and I often send dogs that I fostered to their new homes with collars that have my number stitched on them… Does this dog have a collar with my phone number?”

Long story short, that was exactly the case. As the person described the dog, I remembered what dog they were describing. I was able to pull up that dog’s owner’s information and send them HIS number. It turned out that he had left the dog with his parents, the dog had escaped their yard and wandered into some other dog’s yard, and a fight ensued. Thank goodness, as it turned out, the dog who had been injured just had sand in his eye. Both dogs were ok, and the dog who was wearing the collar with my number on it was returned to his owner’s parents.

I suggested to his owner, “Hey, it’s been about 18 months… maybe you should get your dog a collar with YOUR number on it? And if your dog stays with your parents regularly, maybe get him a tag with THEIR number on it, for him to wear when he’s there?”

Backup or alternative contact numbers are critical. I just read an account of a young man who left his service dog in his car at a gas station, with the car and the air conditioning turned on. Someone jumped into the car and drove away, stealing the young man’s car and dog. The dog was turned loose many miles away and was picked up by a shelter; shelter staffers called the number on the dog’s tags, but alas, the owner couldn’t get those calls for a few panicky days, because his cell phone was also stolen.

Fortunately, he finally was able to get the messages and the dog was returned, but what if it had been in an area where the dogs don’t have much time in a shelter before the unthinkable? So scary to contemplate.

MANY of us need to put a tag with a backup number on our dog’s collar. It occurred to me one day as I was driving with my dogs: If we got into an accident and I was killed and my dogs survived, who would the first responders call? Only MY number is on my dogs’ collars! Though I’m not a fan of tags (hence my large collection of collars with my number stitched into them), I’m having some tags made with my husband’s and my son’s number engraved on them, to use when I am driving with my dogs. Just in case! 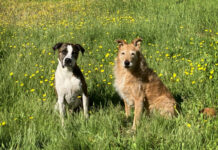 “Teenage” Dogs Can Be Difficult