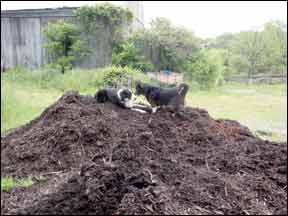 There’s nothing like a good dog-pack hike to give our canine companions an opportunity to have fun with their peers and run themselves into a happy state of exhaustion – provided there are no bullies in the group. Just like human bullies on a school playground, canine bullies take the fun out of the game, put everyone on edge, and bring to the party a real risk of physical as well as psychological damage. A dog who is bullied, especially at a young age, can quickly develop a negative association with other dogs and become defensively aggressive as a result.

My love affair with group dog hikes goes back to my days working at the Marin Humane Society in California. Employees were allowed to bring dogs to work with them, and many a lunch hour found several of us hiking together. I don’t recall incidents of bullying from those days, perhaps because our dogs were well socialized from their “go-to-work” privileges, perhaps due to selective memory, or perhaps because of my blissful relative ignorance of canine behavior in those early days. But bullying is a very real possibility anytime a group of dogs gets together – at dog parks, daycare, at organized or impromptu play sessions, or when multiple dogs live together in the same household.

I recently invited all our Peaceable Paws trainers to come for a dog-pack hike on our 80-acre campus in conjunction with one of our occasional trainer meetings. We hike before our meetings so our four-legged pals are too tired to pester us while we plan future Peaceable Paws events and debrief past ones. As you might expect, the canine participants in this group were varied and enthusiastic, including a German Shepherd/Rottweiler-mix, an American Pit Bull Terrier, a pair of Dachshunds, a hound-mix, a Labrador Retriever, a Border Collie, a Miniature Pinscher, and two of my own dogs: Lucy the Cardigan Welsh Corgi and Missy the Australian Shepherd.

Much as I love a good group hike, I was dismayed when, throughout the hike, Lucy demonstrated a strong penchant for bullying Belle, the very soft, extremely appeasing Border Collie belonging to Peaceable Paws trainer Beth Joy.

Bullying – an inappropriate canine behavior – is often misidentified as “dominance.” Much has been said lately in the dog world about dominance, but the short version of the discussion is that, while dominance is a correct term for a very narrow selection of appropriate social behaviors, it is not a correct term for a wide range of inappropriate social behaviors that include bullying and aggression. (See “Alpha Schmalpha,” WDJ December 2011.)

Although the “bully” term isn’t found in most behavior literature, in her excellent book, Fight!, trainer and author Jean Donaldson defines bullying dogs – not to be confused with “Pit Bull-type dogs” – as those dogs for whom “roughness and harassment of non-consenting dogs is quite obviously reinforcing.” Like the human bully on the school playground, the bully dog gets a kick out of tormenting less-assertive members of his playgroup. Donaldson says, “They engage at it full tilt, with escalating frequency, and almost always direct it at designated target dogs.” Target dogs are most likely to be those who, like Belle, are non-assertive and quickly offer exaggerated appeasement signals. Appeasement signals are meant to cut off another dog’s overly assertive behavior, but with bullies, it just seems to egg on the bullying behavior.

Like all behavior, bullying is a combination of genetics and environment. A dog who becomes a bully is born with a genetic predisposition to be reinforced by another dog’s appeasing response to his socially overbearing behavior, just as a Border Collie finds it reinforcing to chase things that move, or a Lab is reinforced by holding things in his mouth.

If a pup or a young dog has an opportunity to test a bully behavior strategy on another pup or dog who offers a satisfyingly appeasing response, the behavior has been reinforced and the bully-to-be is more likely to attempt the behavior again, perhaps more forcefully (inappropriately) the next time. If, however, his early attempts at bullying are ignored, or squashed by a more assertive response from his intended targets, the bully behavior may never develop. Hence, bullying, like other undesirable behaviors, is easiest to modify early on, before the dog has a long and strong reinforcement history for the behavior.

Playing v. Bullying
It can be difficult for some owners to differentiate between appropriate rough play and bullying. Some may think that perfectly acceptable play behavior is bullying because it involves growling, biting, and apparently pinning the playmate to the ground. Appropriate play can, in fact, look and sound quite ferocious. The difference is in the response of the playmate.

If both dogs appear to be having a good time and no one’s getting hurt, it’s usually fine to allow the play to continue. Thwarting your dog’s need to play by stopping him every time he engages another dog in rough-but-mutually-agreeable play, can lead to other behavior problems, including aggression, from the frustration of not being able to fulfill his desire for social interaction.

I watched the two younger dogs interact while the husband restrained the elder to keep him out of the mix. Their play was lovely to watch. Rough, yes, with lots of “chew-face,” growling, and body-slamming, but perfectly appropriate. Both dogs were fully engaged in play, and each, when given the opportunity, chose to come back and re-engage. After a full 90 minutes of non-stop play, they finally ended the session of their own accord and lay happily panting on the floor, at which point the senior dog, who was indeed very tense about the high-energy play session, was also able to relax. So was the wife.

I reassured the couple that there was no bullying happening here, and that they were fortunate the two younger dogs would be able to play together regularly. What a great way to provide exercise for the young, energetic dogs! Over time, the intensity of their play would likely diminish somewhat, as they were allowed to “get it out of their system.” A bigger challenge was the senior dog. They would need to remove him from the play area when the other two were playing, and/or implement a behavior modification counter-conditioning program to help the elder dog become comfortable with the younger dogs’ play.

Modifying Bully Behavior
If you do have a dog who is bullying others, you may be able to successfully modify the behavior, especially if you start young. If not, you will need to always manage his behavior by selecting playmates for him who don’t fall into the “target” category. Successful modification of bullying behavior requires:

2. Excellent timing of intervention: Prompt application of NRMs and time-outs will let your dog know exactly what behavior makes the fun stop.

3. Reinforcement for appropriate behavior: Allow play to continue or resume when the bullying dog is calm and can play nice.

4. Selection of appropriate play partners: Dogs who are not intimidated or traumatized by bullying behavior, and who don’t take offense by fighting back, may be appropriate playmates for bullies.

My preferred NRM, the one I teach and use if/when necessary, is the word “Oops!” rather than the word “No!” The word “No!” is often used by dog owners to deliberately shut down behavior. It’s also usually delivered firmly or harshly – and unfortunately, often followed by physical punishment. In contrast, “Oops!” simply means, “You made a wrong behavior choice; the good stuff is going away.” Deliver your NRM in a cheerful or neutral, non-punitive tone of voice; your intent is not to intimidate your dog with the no-reward marker. Thus my choice of “Oops!” – it’s almost impossible to say the word harshly. Try it!

Timing is just as important with your NRM as it is with your reward marker. It says, “Whatever you were doing the exact instant you heard the ‘Oops!’ is what earned the time-out.” You’ll use it the instant your dog starts bullying. Then grasp his leash or drag-line (a long, light line attached to his collar) and calmly remove him from play. Don’t repeat the NRM. Give him at least 20 seconds to calm down, more if he needs it, then release him to go play again. If several time-outs don’t dampen the behavior even slightly, make them longer and make sure he’s calm prior to returning to play. If a half-dozen time-outs have absolutely no effect, end the play session for the day. If the NRM does stop the bullying, thank your dog for responding, and allow him to continue playing under direct supervision as his reward.

Another approach to bully modification that is sometimes effective requires access to an appropriate “neutral dog” who is confident enough to withstand the bully’s assault without being traumatized or responding with inappropriate aggression in return. A flash of the pearly whites as a warning is fine. A full-out dogfight is not. It’s important to watch closely during interactions with the bully. Any sign the neutral dog is becoming unduly stressed by the encounters should bring the session to an immediate halt. A neutral dog may be able to modify your bully’s behavior, and have it transfer to other dogs – or not. If not, you may be able to find one or two sturdy, neutral dogs who can be your dog’s play companions, and leave the softer dogs to gentler playpals. Not all dogs get along with all other dogs – and that’s perfectly normal.

Managing My Bully
We managed Lucy and Belle on our dog-pack hike by putting a lot of space between them, and by keeping Lucy occupied with chasing a stick (one of her favorite activities). Since Belle was more than happy to keep her distance from Lucy, we only had to body-block Lucy a few times when we saw her zeroing in on her target. The after-hike meeting was without incident; I put Lucy back in the house so Belle could hang out, worry-free, with the rest of the dogs. 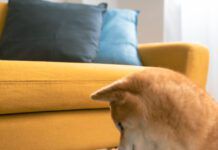 Why Does My Dog Stare at Me? 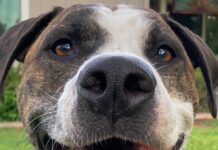 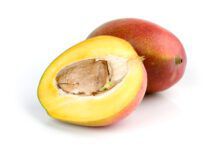