In dog training, we most frequently hear the term “poisoned” attached to the word “cue,” meaning a cue for a particular behavior has taken a negative association, either because the cue has become associated with deliberate punishment or because the cue was given at the same time as some unfortunate unexpected aversive event.

The cue for “come when called” frequently becomes poisoned when someone is foolish enough to punish their dog (for running away, as the most common example)  after the dog finally comes back, or calling him and then doing something he doesn’t like, like giving him medication or crating him. The dog thinks bad things happen when he responds to the “Come” cue and is less likely to come the next time he is called.

A dog’s name can also be poisoned if his human makes the mistake of saying, “No, no, Rocky!! Bad dog, Rocky!”

An example of an “unfortunate aversive event” might be that your dog just happens to touch his nose to your horse’s pasture electric fence at the same time you give the “sit” cue, so your “sit” cue becomes poisoned. Your dog now thinks “Sit!” means he is about to get shocked.

Objects also can become poisoned when they are associated with an aversive event. Something your dog previously loved, such as his mat, can become aversive if it is repeatedly associated with something that he finds mildly to moderately stressful, such as frequent trips to the veterinary clinic, or even nail clipping or medical treatment procedures at home.

Once you have mat-trained your dog, recognize and protect the value of his positive association with his mat. Make sure that for every time you use it to help him with a mildly to moderately stressful situation that you follow it with many happy and fun “Place” repetitions. And don’t even try to use it for things that are extremely stressful for him – it won’t help, and you will likely poison the mat and lose your very valuable training and management tool. 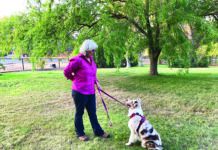 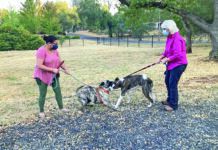 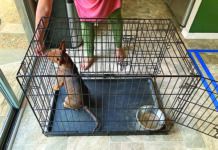