In August 2011 my friend Tory felt a couple of small lumps on the throat of her 13-year-old mixed-breed dog, Scout. Within a couple of days of discovery, Scout was diagnosed with lymphoma.

While Scout was still relatively healthy, Tory’s veterinarian guided her to define what Scout’s quality of life should be so that there were clear guidelines in place as the disease progressed, preempting any “bargaining” that could occur if he declined past those non-negotiable limits. Scout was started on prednisone and underwent the CHOP protocol (with a few breaks between treatments for gastric upset); the lymphoma was successfully put into remission.

At the end of the year, five months after diagnosis, the lumps had reappeared and Scout was panting, lethargic, and generally uncomfortable. Those guidelines Tory had put in place earlier allowed her to be clear in her decision not to pursue any further treatment. Scout enjoyed two weeks of bucket-list adventures, including his favorite meal of a Thanksgiving dinner, before he was assisted with his passing.

Not long after, my friend shared the following observation with me: 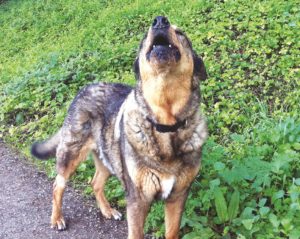 “After Scout’s diagnosis, I became way more lenient with his loud mouth. In fact, I began embracing his ‘stand in the middle of the dog park and bark’ antics. I would just watch him and laugh rather than ignore him or try to stop him. When I realized he was at the end of the line, he was allowed to eat at the kitchen table with us. He demanded food and got it served to him on a fork – while we were eating. Although he often ate whatever I was eating anyway, he had always waited until I was finished and then he’d be given some leftovers.

“The most interesting behavior change, though, took place within me. Before Scout’s illness, I wouldn’t let him do those types of things, those things that used to annoy me. After diagnosis, I viewed those behaviors from a different perspective; I found them hilarious and I embraced them.” 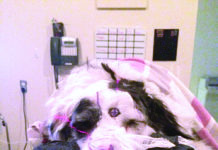 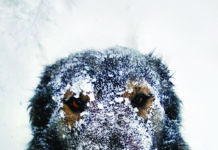 Winter Warnings for your Dog 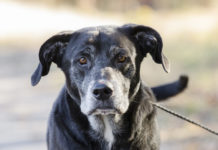 On the Horizon: Hemangiosarcoma Studies