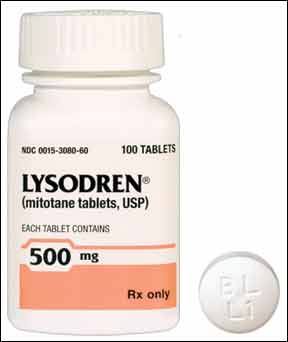 What if your dog has all the symptoms of Cushing’s – excessive drinking, urination, and appetite; pot belly; skin problems; elevated alkaline phosphatase; etc. – but the tests say no?

Veterinary endocrinologists at the University of Tennessee in Knoxville (UTK) have been investigating this phenomenon. They found that many dogs have elevated steroid intermediates (also called steroid precursors or “sex steroids”) with normal cortisol. They call this condition “atypical Cushing’s disease,” or “adrenal hyperplasia-like syndrome.” It has been suggested that cases of atypical Cushing’s disease may be caused by a problem in the steroid production pathway. Elevated steroid intermediates have been linked to sudden acquired retinal degeneration syndrome (SARDS), which causes sudden blindness in dogs.

These steroid intermediate hormones include 17-hydroxyprogesterone (also called 17-OH progesterone or 17-OHP), progesterone, androstenedione, estradiol, and aldosterone. UTK developed a steroid hormone profile test to measure these hormones both before and after ACTH stimulation. Steroid hormone profiling is indicated when other tests of adrenal function are negative (ACTH stimulation and LDDS), but the dog still exhibits signs of Cushing’s.

One or more of these steroid intermediate hormones are increased in affected patients, both before and after ACTH stimulation.  Estradiol does not respond to either ACTH or dexamethasone, while 17-OHP shows an exaggerated response to ACTH administration in cases of both atypical and typical Cushing’s.

Atypical Cushing’s can be either pituitary or adrenal. Dogs with pituitary-dependent atypical Cushing’s usually have an enlarged liver, hepatopathy (liver abnormalities), and enlargement of both adrenal glands, along with increased levels of endogenous ACTH. Dogs with the adrenal form will also have an enlarged liver and elevated liver enzymes, but in this case only one adrenal gland will be enlarged (the other may be atrophied), and endogenous ACTH levels will be decreased.

Both forms cause the usual clinical signs of Cushing’s disease, including bloodwork changes and haircoat problems. If aldosterone is elevated, it can cause hypertension (high blood pressure), high sodium, and low potassium leading to muscle weakness.

In some cases, adrenal tumors can secrete other steroids besides cortisol, and cortisol levels may be normal. Ultrasound is recommended to confirm whether a tumor is present before beginning treatment. If a tumor is found, surgical removal is recommended, especially since noncortisol-secreting adrenal tumors are almost always carcinomas. If that is not possible, mitotane (Lysodren) is the next choice, although it will not affect estradiol levels, and these types of noncortisol-secreting adrenal tumors tend to respond poorly to medical treatment. Trilostane is not recommended, as it can cause increases in intermediate steroid hormones.

Elevated estradiol, called hyperestrinism or hyperestrogenism, causes many of the same signs as elevated cortisol does. In dogs with hyperestrinism, ACTH stimulation and LDDS tests are usually normal for cortisol, thyroid function is normal or controlled, and liver problems are frequent and typical (very high alkaline phosphatase, enlarged liver, and other liver abnormalities). Symptoms frequently include excessive drinking and urination, along with haircoat problems. Panting may also be present. A skin biopsy will suggest endocrine abnormalities.

Veterinarians at UTK advise treating atypical Cushing’s and hyperestrinism with melatonin, which decreases cortisol and sometimes estradiol levels as well, and lignans, a type of phytoestrogen, which may also inhibit enzymes involved in the production of estradiol. Lysodren (mitotane) can be combined with melatonin and lignans to help lower sex steroid levels other than estradiol, along with suppressive effect on cortisol level.

What’s your charitable dog cause?

Nancy Kerns
11
When it comes to our spare time, we all find different things to become involved with – different causes grab us for...