All dogs have noses – and they all know how to use them. Our awareness of our dog’s nose capabilities is nothing new. We humans have long taken advantage of our dogs’ scenting prowess in a variety of ways – hounds who track game, rescue dogs who search for missing persons, narcotics detection dogs who find hidden drugs, and much more. Recently, however, both science and the dog-training world have taken a new look at and developed a new respect for the dog’s olfactory abilities, and what putting them to use can do for your dog’s mental and behavioral health!

Know this about Dog Noses

First, some basic biology. According to Alexandra Horowitz, Ph.D., psychology professor and head of Barnard College’s Horowitz Dog Cognition Lab at Columbia University in New York, while humans have about 5 million olfactory cells, dogs have between 200 million and 1 billion. Did you get that? Between 200 million and 1 billion. So even the dogs at the low end of that range have 1,000 times as many olfactory cells as we humans!

SNIFF OUT THESE RESOURCES

Being a Dog: Following the Dog into a World of Smell by Alexandra Horowitz (Scribner, 2016)

Missing Animal Response Network (Information on how to train your dog to find missing pets): missinganimalresponse.com

Dogs also have a “second nose” – the vomeronasal organ (also called Jacobson’s organ), which enhances the dog’s ability to detect and identify scent. These two factors combined help to explain why our dog’s sense of smell is so much better than our own.

Today, dog noses are employed in a long list of activities that go far beyond hunting for game. The list is ever expanding, and we are just beginning to recognize the benefits the dogs themselves reap from being allowed and encouraged to use their super-noses.

The rapidly growing popularity of K9 Nose Work competition and titling has brought revelations to the dog-training world about the behavioral advantages of encouraging dogs to use their noses. A growing number of shelters and rescue groups are also realizing the benefits of allowing/encouraging their canine charges to engage in scenting activities to make their dogs more adoptable. Many previously fearful dogs have come out of their shells and gained confidence in leaps and bounds as a result of doing scent work – perhaps because it is so innately reinforcing to them, and they are so capable of success.

Most humans recognize how immensely success contributes to our self-confidence. The same is true of dogs (and other species). Even something as simple as the “Find it!” game (described on the next page) can do wonders to help a shy or fearful dog adjust to the scary world. If you are interested in enrolling your dog in K9 Nose Work classes and/or competition there are certified trainers all over the country who can help you; see “Sniff Out These Resources,” above.

Here are just some of the things you might find dog noses detecting these days in addition to hunting game, drugs, and lost persons:

Horowitz has been exploring the connection between a dog’s sense of smell and his cognition. A “sense of self” or self-recognition is one of the elements of cognition, and the long-held test for self-recognition has been an animal’s ability to recognize himself in a mirror. The way this is usually tested is to put a dot of colored paint on the face of the subject and hold up a mirror. If the subject touches the dot on his own forehead, the conclusion is that he realizes it’s him in the mirror – he has a sense of self. If he touches the dot on the reflection instead, he supposedly does not recognize himself.

As of 2015, only great apes (including humans), a single Asiatic elephant, dolphins, orcas, and the Eurasian magpie had passed this test. A wide range of species have reportedly failed the test, including several species of monkey, giant pandas, sea lions, and dogs.

Recognizing that dogs may have a stronger self-recognition through scent rather than sight, Horowitz devised a study to test this, by allowing them to smell the scent of their own urine and another dog’s urine. The results of her study seem to confirm her hypothesis. Her subject dogs spent more time sniffing another dog’s pee than their own, indicating a self-association with their own scent, hence a sense of self.

Scent as a Reinforcer: “Premack” It!

Switching from science back to practical (with a touch of science) if you are frustrated by your dog’s constant sniffing on walks, here are a couple of things to consider:

A Nose Game All Dogs Enjoy: Find It!

“Find it” is a ridiculously easy and delightful game that any dog can play, as well as a game you can play to change behavior in the presence of a fear- or arousal-causing stimulus, eventually changing your dog’s emotional response from frightened to happy.

Start with your dog in front of you, and handful of tasty treats behind your back. Say “Find it!” in a cheerful tone of voice and toss one treat at your feet. Click just before your dog eats it. (Tap your foot or point if necessary, to draw your dog’s attention to the treat.)

When he’s done eating the treat, say “Find it!” again, and toss a second treat at your feet. Click as he eats the treat. Repeat multiple times until your dog’s face lights up when he hears the “Find it!” cue and he orients to your feet in anticipation of the treat. (Use a different “search” cue if you want to toss treats farther away, so “Find it!” will always orient your dog to your feet.)

Now if a scary skateboarder or some other arousal-causing stimulus appears while you’re walking your dog around the block on his leash, play “Find it!” and keep the tossed treats close to you. Your dog will take his eyes off the scary thing and switch into happy-treat mode. You’ve changed his emotions by changing his behavior.

To employ the Premack Principle, you use a more likely/more desirable behavior as the reinforcer for a less likely/less desirable behavior. (Some people call this “Grandma’s Law”: You have to eat your vegetables before you can eat your dessert.)

You can click-and-treat your dog for walking nicely with you, but if you occasionally tell her to “Go sniff!” as the reinforcer for polite walking, you’ll score big points in her eyes. Do it frequently and you’ll likely end up with a much more willing walking partner who trots happily next to you in eager anticipation of the next “Go sniff!” cue.

There is one more incredibly important benefit of encouraging your dog to use her nose: Your presence during her highly reinforcing, very enjoyable scent activities will enhance your relationship with her, and strengthen the bond that you already have. What’s not to like about that?

So, consider the various options for playing with your dog’s nose, from the very simple “Find It!” to finding lost pets and humans, and everything in-between, decide what you want to do, and start getting nosey. Your dog will love you for it! 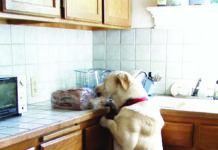 Counter Productive: How to Keep Your Dog From Stealing Unattended Food and Other Edible Items 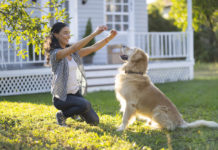 How to Teach a ‘You Choose’ Cue

Nancy Kerns
30
We often read discussions of whether dogs experience guilt; we’ve published a few, too. But here is a twist I don’t think...