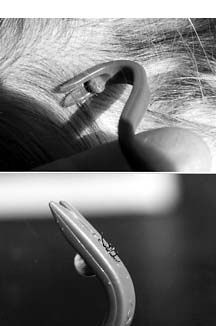 A humane way to stop barking? Sounds too good to be true – but here it is. While some trainers use electric shock routinely in their training programs, many dog owners and trainers have righteously refused to use electric shock collars for any aspect of managing their dogs’ behaviors.

A recent introduction to the U.S. dog product market by Animal Behavior Systems, Inc. (ABS), offers trainers and dog owners an alternative that uses non-shocking devices to humanely manage and correct a variety of unacceptable dog behaviors. Each of the ABS behavior management products utilizes the same basic technology – the dog wears a nylon collar with a sensor unit attached, and a pressurized reservoir filled with citronella. When the sensor unit is triggered it releases a brisk citronella spray-burst in front of the dog’s nose.

The spray is a natural, non-toxic liquid that distracts the dog from the inappropriate behavior and acts as a mild aversive. (The odor is pleasing to most humans and is also commonly used to repel mosquitoes, so it coincidentally acts as a natural air freshener and mosquito repellent!) The dog hears, sees, feels and smells the spray and finds the experience distasteful, and soon learns which behaviors to stop in order to avoid triggering the spray.

ABS Anti-Barking System:
The Anti-Barking System is the original citronella collar product. With this collar, the sensing unit is triggered by the sound of the dog barking. The dog soon realizes that the spray is triggered whenever he barks, and in a short while chooses to remain quiet. The Anti-Bark Kit consists of the adjustable collar, one can of citronella, a 6-volt alkaline battery and detailed instructions. It is available in two sizes – the larger, approximately five ounces, is recommended for dogs 15 pounds or over. The smaller two ounce size is best for toy-sized dogs. The collar unit is simple to assemble and use, and has two settings so that trigger sensitivity can be adjusted according to need. Clinical studies reportedly found the collar’s effectiveness to be near 90 percent. WDJ’s consulting trainer reports a similar success rate, and raves about the product, giving it a definite “paws up.”

ABS Indoor Area Avoidance System (IAAS):
The IAAS is used to keep dogs away from an “off-limits” designated piece of furniture, room, or other area inside the house, utilizing the same citronella technology. It is activated by a radio wave from a transmitter which is matched to the receiver collar worn by the dog. The transmitter can be adjusted to create a circular radio-wave barrier from a two- to 20-foot radius. When a dog approaches within two feet of the barrier she first hears an audible tone warning. If she continues forward, she receives a spray of citronella every five seconds until she retreats. If she remains inside the barrier the audible tone changes and increases in frequency, and the device continues to spray every three to five seconds.

In order for an area-avoidance device to be most effective, it needs to be triggered by the dog’s behavior even in the owner’s absence, reset itself so it can work repeatedly, and present an aversive that elicits the desired response in the dog without causing panic or undue stress. The IAAS meets these criteria and also receives the WDJ seal of approval.

ABS Outdoor Area Avoidance System (OAAS):
The OAAS utilizes the same citronella spray and radio wave barrier as the indoor system. The difference is that the outdoor system has a wire that can be buried in the ground, and can cover several acres of space.

This type of system (using electric shock) has been marketed for several years as a “virtual fence” dog containment system. However, Animal Behavior Systems believes that the system is better used as area avoidance (to keep your dog out of your garden, or away from livestock or poultry, for example) rather than confinement. WDJ agrees that virtual fence systems present serious safety concerns when used as a primary means of confinement for a dog, and recommends the OAAS as an avoidance system only, not for primary confinement of your dog.

ABS Remote Trainer:
The Remote Trainer incorporates the same technology as the anti-bark system, with one exception. The difference is that the spray is activated by a remote radio signal from a hand-held device triggered by the person training the dog. It is useful for getting a dog’s attention during training, and can deliver either a short or long spray. When using an aversive correction in training it is important that it be done properly. Timing is critical, and any correction needs to be followed by the eliciting of appropriate behavior that can be followed by a reward. An aversive used improperly loses its effectiveness as the dog becomes acclimated to it, especially if acceptable behavior is not established in place of the inappropriate behavior that is interrupted by the aversive. For this reason, ABS and WDJ both recommend that the Remote Trainer be used only under the guidance of a skilled professional trainer or animal behaviorist.

ABS Behavior Management Systems are available through veterinarians, trainers and animal shelters. For a distributor near you, contact Animal Behavior Systems, Inc. at 1-800-627-9447.

Ring Around the Collar
“Color & Herbal” 100% Natural Herbal Pet Collar: This collar, marketed as a natural flea-repellent, resembles a rolled-up bandanna, about 3/4 inch thick, and is filled with herbs (Chamomile, Pennyroyal and Eucalyptus) and impregnated with natural essential oils (Citronella, Pennyroyal and Eucalyptus). The ends are shoelace-like strings that you use to tie the collar around your dog’s neck. It smells good, although pretty strong when the package is first opened – owners of indoor dogs might want to let the collar air out for a few days before using it. A second style, “Bandit’s Bandanna” is also available, which has a triangle-shaped piece of cloth that hangs down and makes more of a country-western fashion statement.

The company that produces the collar recommends its use with a complete, five-step natural flea-control program that incorporates a total of five “Color & Herbal” products, including flea shampoo, spray, carpet powder, yeast & garlic tablets. They also offer “Color & Herbal’s” Renewal Oil that can used to refresh and prolong the life of the collar and for additional protection in the heavy flea season.

WDJ applauds the concept, and the use of a natural flea-control program, but has some concerns about the overmarketing of products for this purpose. Cost- conscious dog owners could probably make the collar themselves using a bandanna and herbs and oils from a local natural food store – and have their choice of bandanna styles to boot. Flea shampoos and sprays, even natural ones, should be used on an as-needed basis, as a back-up to mechanical, non-chemical flea-control methods such as flea-combing, regular vacuuming (and disposal of the vacuum bag), and routine washing of dog bedding. To locate a retail outlet near you, call (800) 259-1701.

Tick Talk
The O’Tom Tick Remover: From hi-tech to low, this little gadget is the simplest unit you can imagine. It is two inches long, weighs less than a half-ounce and is made of a single piece of green “poly-oxy-methylene” (which is a plastic-like material that is extremely strong and can be recycled or incinerated without the release of chloride fumes). It is curved like a hook, with a slit in the curved end. It was invented by a French veterinarian and has been proven very successful in Europe.

It is as simple to use as it looks. Simply slip the slit in the hook over the tick’s body from the side as close to the dog’s (or your!) skin as possible and turn counterclockwise. After two or three rotations the tick detaches itself and may be safely lifted out and disposed of.

Our tester tried the O’Tom tick remover when she found a tick on her own dog recently and the tick slipped out like magic. No need to touch the tick and risk exposure to Lyme disease. No risk of breaking the tick mouth parts off in the dog’s skin. And absolutely no discomfort or struggling on the part of the dog.

The O’ Tom is available through veterinarians and some animal shelters. If yours don’t carry it, ask them to contact “C-Specialties, Inc.” at 800-234-5330 to become a distributor. Our tester and the WDJ give the O’Tom tick remover a strong recommendation as an inexpensive but important addition to your first-aid kit. 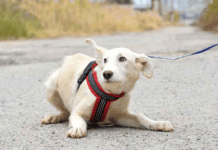 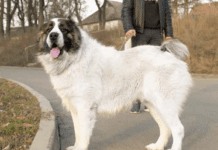