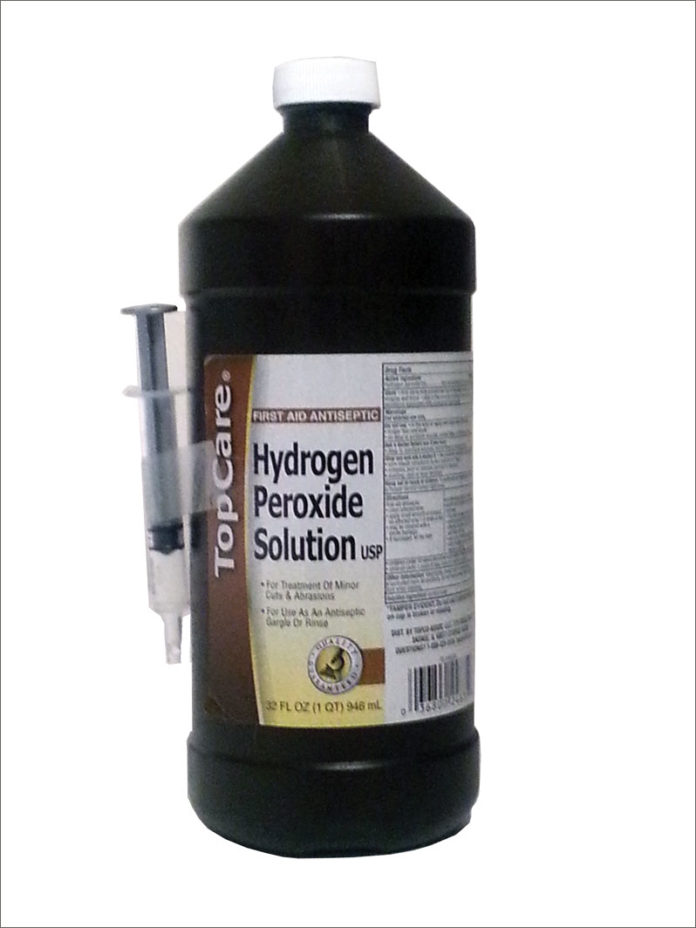 I can still vividly recall the panic I felt five years ago when I looked up to see my beloved Bouvier, Axel, then 12 years old, stretch out his neck, give a gulp, and swallow the IQube Puzzle Plush squeaky plush ball that he’d been sucking on.

I looked at him in disbelief; had he really just quaffed that thing? And should I try to get him to throw it back up?

For most of us, seeing our dogs swallow a toxic item, whether it be a toy, medication, food product or what-have-you, is one of the most frightening pet parent moments. If your dog swallowed something harmful, would you know if and how to induce vomiting?

In Axel’s case, I didn’t even try, and quickly took him to an emergency veterinary clinic where they made my dog vomit. Despite their efforts, the ball remained in his belly. We were given the okay to take him home and observe him for any signs of discomfort.

Today, my husband and I share our home with an adolescent Bouvier, Atle. While Atle is no more prone to eating inappropriate items than the next adolescent dog (that is, fairly likely!), I’ve decided it’s high time that I learn how to make my dog throw up in an emergency.

How To Induce Vomiting in Dogs

Dr. Jennifer Pittman is a critical care specialist at BluePearl-Georgia Veterinary Specialists in Atlanta, where she spends most of her time in the ICU and ER, and sees anywhere from 4 to 10 toxicity cases a week. As a Diplomate of the American College of Veterinary Emergency and Critical Care, toxicity is right up her alley – and she would like the opportunity to consult with a pet owner before said owner induces throwing up.

“There are things that we don’t want to come back up,” Dr. Pittman warns.

Also, inducing vomiting is not without risk of potential complications, such as aspiration of vomitus, which could lead to the development of pneumonia. Talking with a veterinarian beforehand lets you weigh what your dog has ingested against the risk of making the dog vomit. If your Chihuahua eats one Hershey Kiss, for example, it’s likely he’ll be okay, so inducing vomiting can probably be avoided.

Conversely, is your dog throwing up on their own, without inducing? If your dog eats something they shouldn’t, it’s possible they’ll vomit it up themselves. There are some situations, however, in which dogs vomit because they are ill, such as if they have pancreatitis, gastritis, IBD, Addison’s disease, or liver disease. Know why your dog is throwing up, and do not try to induce vomiting if the dog has already done so.

Hydrogen peroxide (H2O2) is the therapy to use should you need to make your dog vomit. The solution works as a direct irritant to the dog’s gastric lining; in a perfect world, the dog vomits fairly quickly after administration.

How Much Hydrogen Peroxide to Give Your Dog?

The dose of hydrogen peroxide is small: 1 teaspoon per 5 lbs of the dog’s body weight, with a maximum of 3 tablespoons. There are 3 teaspoons per tablespoon, so the maximum dose for dogs who weigh more than 45 lbs is 3 tablespoons per dose.

If the H2O2 works its magic, your dog should vomit within two to five minutes of receiving the first dose. If he doesn’t vomit within five minutes, it’s okay to re-dose. Then stop. Dr. Pittman warns that if your dog does not vomit within 10 minutes, you should be on your way to the vet. Do not administer more than the suggested dose. If given an exceedingly large dose of H2O2, the dog’s stomach could rupture!

Below, we discuss how to give your dog hydrogen peroxide in order to induce vomiting.

When Do You Need to Make Your Dog Throw Up? When is Inducing Vomiting Dangerous for Dogs?

Although Dr. Pittman says that she hesitates to provide hard and fast rules of when we should absolutely induce vomiting, she does have some general guidelines for different situations:

When to Make Your Dog Vomit Immediately:

If you see your dog ingest antifreeze, induce vomiting immediately. Anti-freeze is very rapidly absorbed across the gastric wall; within 30 minutes or less of ingestion, enough antifreeze has already been absorbed by your dog’s body to cause kidney toxicity. And then get your dog to a veterinary clinic ASAP.

When You Should Make Your Dog Throw Up:

If your dog ingests human medication or a goodly dose of another dog’s medications, it’s a good idea to make the dog vomit. “That would be a time I’d say to induce vomiting regardless,” Dr. Pittman advises.

Circumstances Which It Depends on What Your Dog Swallowed:

Say your dog swallows a golf ball or your daughter’s teddy bear. Depending on the size of your dog versus the object, inducing vomiting might be a good idea, but many times, the object needs to be removed with an endoscope. In these cases, confer with your veterinarian regarding the probability that the object could make it back up your dog’s throat if vomiting was induced.

You Probably Should Not Make Your Dog Vomit If:

Your dog drinks an acidic substance such as bleach or a household cleaner, or eats a sharp-edged item. Inducing vomiting in these cases is more safely accomplished under the direct supervision of a veterinarian who can weigh the risks and benefits and act quickly if the plan goes south.

Do NOT Make Your Dog Throw Up If:

Although it’s best to act within an hour of ingestion, inducing vomiting can be effective up to four hours post-ingestion in some cases. The caveat is that you should always consult a veterinarian or one of the veterinary phone consult toxicology services before inducing vomiting!

Who to Contact If Your Dog Eats Something Toxic

Your initial call for advice can be to your local veterinarian or a poison control hotline. If your dog has ingested something fairly pedestrian (yet still potentially dangerous) such as a box of dark chocolate, a pound of raisins, a bulk package of gum containing xylitol, or other potentially toxic food products, odds are that your vet can adequately advise you. If your dog’s choice of poison is something more exotic, such as a cocktail of grandma’s beta blockers, statins, and anti-anxiety meds, you’d be better off making your first call to an animal poison control hotline.

There are two phone consult toxicology services, both offering consultations 24/7 and run by veterinarians:

When you call, you’ll provide the consulting veterinarian with the details of what your dog consumed, his age, weight, and other pertinent facts, and in return you’ll get a case number. The benefit to doing this before traveling to your vet clinic, or even en route (if someone else is with you and they are driving) is that by the time you reach the clinic, your veterinarian can call the service back with your case number and hit the ground running.

Dr. Pittman notes that many veterinary clinics themselves will err on the side of caution and consult poison control for two reasons:

-To check for updated information about recent toxicities and newer formulations of drugs and combinations; many drug interactions are not commonly known.

-To document the case and build a bank of information for treatment of future cases.
“In a perfect world,” Dr. Pittman says, “you’d initiate contact with your local vet and contact the service at essentially the same time.”

Administering the Hydrogen Peroxide to Your Dog

A syringe is the first choice; it enables you to measure the dose precisely, and squirt it right into the back of the dog’s mouth.

If your dog is prone to eating odd things, keep an unopened bottle of peroxide (so that it’s unoxidized and fizzy-fresh if needed) and fasten a syringe to the bottle with a rubber band, so you have everything you need in an emergency.

Another tactic that Dr. Pittman finds useful is to soak a piece of bread with the measured dose of hydrogen peroxide and immediately feed it to the dog.

Don’t be disappointed if your pooch doesn’t produce. “In the majority of cases, trying to induce vomiting at home, unfortunately, is not as successful as we wish it would be. Don’t be disappointed when it doesn’t work, and know that you’re not alone,” says Dr. Pittman.
Whether the induction “works” or not, your next move is to head immediately to your dog’s veterinarian or veterinary emergency clinic.

If you succeed in getting your dog to vomit, it’s helpful to clean up and bring the vomitus with you to the vet’s office. “That’s probably the least glorious part of this whole process,” says Dr. Pittman. “If you’re worried that your dog ate four pills, we’ve got to search through that mess and try to identify those four pills.”

Save the Vomit for the Vet?

Yes and no. “Absolutely, we’re happy to evaluate what came up,” says Dr. Pittman. That said, even having the vomit won’t solve all the mysteries. “But some medications, like gel caps or rapid release formulas, dissolve the minute they hit the stomach, so we’ll never find those.” But if fragments of the pills are found, it can make a huge difference in the next course of action, says Dr. Pittman: “The difference in the pills still being there versus them not, may mean three days of hospitalization.”

The Toy in My Dog’s Belly

Axel’s ball remained happily ensconced in his belly for about six months. Then, as these things are bound to happen, it re-emerged as a threat when we left Axel with a pet sitter and vacationed in Italy. When the sitter called to report that Axel was lethargic and not eating, all we could think about was the “smoking gun” of that darn ball. Blood tests and x-rays revealed nothing else askew.

I’m not sure that we would have elected for exploratory surgery had it not been for the missing toy, but fortunately, we did. The surgeon opened him up, removed the ball from his stomach – and happened to notice that his liver looked inflamed and infected. The focus of treatment became the liver infection; the stray ball wasn’t the cause of Axel’s malaise at all, but fortunately, it led his vet right to the real problem.

So as it turns out, if I had made my dog puke and gotten the ball back months before, we probably would have declined exploratory surgery and failed to find and treat the liver condition in time. Nevertheless, I’m glad to know now what to do if Axel’s successor, Atle, swallows something he shouldn’t.

What’s your charitable dog cause?

Nancy Kerns
11
When it comes to our spare time, we all find different things to become involved with – different causes grab us for...