I’ll bet that in the past 10 years, every Super Bowl broadcast has been spiked with television ads with dogs in them. Why dogs are such reliable pitchmen for beer, cars, and snack foods, I’ll never know.

Among the highest-rated ads that ran in Sunday’s Super Bowl broadcast was an ad for Doritos, featuring a Pug, Doritos (of course), a nitwit of a boyfriend, and a glass door. When the commercial started, I was certain the punchline would be a computer-generated image of an even flatter-faced Pug. Happily, the dog is the winner at the end of the ad and it’s the nitwit whose face is smushed.

Still, I hope no real-life nitwits are inspired by the ad to try teasing dogs into running into glass doors while cameras record the results.

I was interested to learn that the ad wasn’t the work of a professional ad agency; it was made by an amateur, a 31-year-old part-time web designer who among the winners of a “Crash the Super Bowl contest” contest sponsored by Doritos and Pepsi Max. Reportedly, the guy spent $500 making the ad, which resulted in a $1 million prize from Doritos maker Frito-Lay.

Do you enjoy seeing dogs in advertising? Or do you wish that the ad agencies would leave our furry friends out of their work? 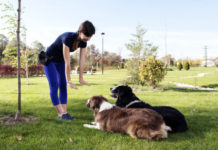