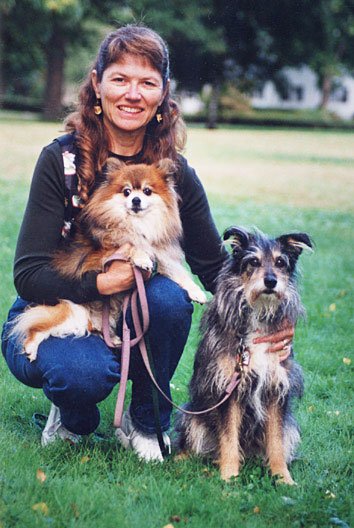 I’m writing this post from Memphis, Tennessee, where I am attending the 25th annual educational conference and trade show of the Association of Professional Dog Trainers (APDT) – and where, tonight, the APDT is honoring Pat Miller with a Lifetime Achievement Award. The award honors APDT members who have made outstanding contributions to the association and to the dog training industry throughout their careers. Pat has been a member of the APDT since its infancy and was elected to its board in 2001 and as board president from 2002 through 2003. She’s also been a frequent presenter at its annual conferences.

I felt strongly compelled to make the journey to Memphis to see Pat honored in this way, because she’s been extremely important to WDJ from day one and remains so today. You can read more about her professional accomplishments in this press release from the APDT, but if you don’t mind, I’d like to tell you about why * I * appreciate Pat Miller.

I first “met” Pat in 1998 when I was helping the editor of an independent start-up publication called The Whole Horse Journal. Pat had written an article about using positive reinforcement – “clicker training” – to train horses. At the time, I was only helping the editor, Diana Thompson, with copyediting and production of the magazine, but I was impressed by Pat’s friendly, accessible, clear writing style and kind, humane advice about teaching new behaviors to horses. Her knowledge wasn’t just cutting-edge, it was light years ahead of most professionals in horse training, a field that has long been characterized by force-based training methods, passed down by tradition and, in 1998, rarely informed by scientific knowledge of learning theory or even basic animal behavior.

That same year, leapfrogging on the budding success of the Whole Horse Journal (no longer in publication), its publisher decided to launch a trial of something called the Whole Dog Journal. Since I had been working on Whole Horse Journal in an informal role since its beginning, the publisher asked me to edit the new magazine. I was flattered, but as I told him, “I’m really more of a horse person! I mean, I * have * a dog, but I don’t know that much about them!” My new boss helpfully pointed out that as a professional journalist, I ought to be able to figure it out.

Most of the “figuring it out” in the first few years of Whole Dog Journal meant leaning hard on truly qualified and knowledgeable experts in their fields and learning as much as possible from them. I needed someone to help educate the readers of WDJ (and me!) about scientifically sound, kind, and effective dog training methods. When I learned that the author of that clicker-training article in the Whole Horse Journal was actually a dog trainer (with a horse addiction), I was thrilled. I zeroed in on Pat as someone who could help me help WDJ’s readers learn to train their dogs in mutually fun and beneficial ways. At my request, Pat wrote an article for the very first issue of WDJ – and she has had an article in every issue save ONE since then. (That omission was my fault; I had her article, but bumped it from the issue for reasons I can’t remember now, but I don’t think Pat will ever let me forget it! I screwed up her perfect record!)

Pat was an extremely early adopter of dog-friendly and scientifically sound training methods. At the time that Whole Dog Journal was launched in 1998, I would characterize the dog-owning public (including myself) as innocently ignorant of the differences between military-style, force-based obedience and fun, family-friendly training.

It seems crazy now, given the happy prevalence of “positive training” today, but 20 years ago, the vast majority of professional dog trainers were openly hostile to “cookie tossers” and “weenie slingers.” But Pat was never defensive about promoting methods based on positive reinforcement; from our first collaboration, she showed me how the proof was in the pudding: happy dogs learning quickly and easily from astonished and grateful owners are the best advocates for this stuff.

In the beginning (as now), I relied on Pat to provide WDJ with informative, clear, sensible articles about basic dog-friendly dog training, which I knew nothing about in those early days. She pointed me toward educational opportunities such as the first APDT conference I ever attended in Ellenburg, New York, in 2001, so I could immerse myself in the topic of modern dog training and try to catch up a little.

Pat introduced me to leaders in the field such as Jean Donaldson, Patricia McConnell, Dr. Karen Overall, among others. Early on, I asked her to take the title of Training Editor, in recognition of her importance to Whole Dog Journal‘s development.

Pat also educated me about things as simple but profoundly important as the need for consistent use of modern language about animals. From the beginning, she gently but persistently convinced me about the need to use “him” and “her” when referring to animals – never “it.” It seems so basic, and yet – well, go read any other newspaper or magazine article about a specific animal. Also, thanks to Pat, we have always used the word “who” rather than “that” in sentences that refer to dogs, just as we would for humans. It’s not “Dogs that bark incessantly…” but rather “Dogs who bark incessantly…”. When we acknowledge the personhood of dogs (or any other sentient animals) in these basic ways, Pat taught me, the reader more readily recognizes the need to deal with them with the respect and kindness accorded to any human animal.

Pat has not only guided my education about canine behavior and training, she has also encouraged other trainer/authors and introduced them to me and to WDJ. Many of our training contributors are people who have either worked with or been one of Pat’s students (at one or more of her Canine Behavior and Training Academies) or who are colleagues that Pat admires and respects. You see, like the best educators, Pat is also a perennial student, always reading, researching, and learning about advances in the field of learning theory. Over the years, I have witnessed the fact that some trainers learn one technique and practice that technique and only that technique for the rest of their lives and careers. In contrast, Pat is always eager to learn something new, try it out on her own dogs, and if it proves to be fun, kind, and effective, she generously promotes the new technology as yet one more option for helping dogs and humans learn together.

Tonight, the APDT will be recognizing Pat for her professional achievements – her many books on positive training, her Academies for dog trainers, etc., etc., – but monthly, with every issue, I hope Whole Dog Journal readers recognize Pat’s contributions as well. 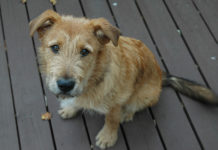 Nancy Kerns
15
Do any of you work in a veterinarian’s office or shelter? If so, what are the words that you wish you could...